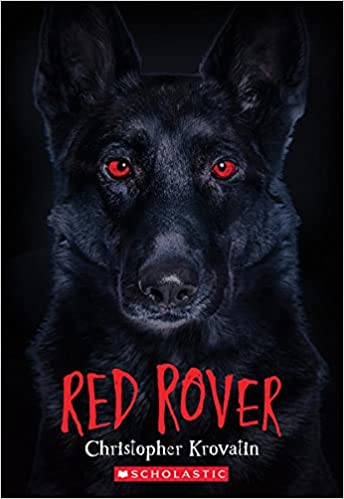 On a car ride back from the beach, sixth grader Amy Tanner notices something strange by the side of the road. It’s a blindfolded dog, muzzled with duct tape. He’s tied to a post with a rusty chain. Concerned for the dog’s safety, Amy quickly convinces her parents to pull over, and the family frees this mystery dog, who they suddenly feel compelled to name Rover. Before long, Rover has charmed his way into the Tanner family home. He especially bonds with Amy’s younger sister, Katie, who seems to hear Rover’s thoughts in her head.

Despite the Tanners’ excitement about having a new dog, Amy begins to notice unusual things happening around Rover. Electronics malfunction. Pets and humans that he dislikes freeze, wide-eyed, as if possessed. And, when Rover is forced to attend the school science fair against his will, a gory “accident” occurs, leaving the rats of a rival project dead. It slowly becomes clear that Rover has strange psychic abilities. Even Amy’s ever-logical parents begin to see that something is wrong.

The Tanners attempt to tame their dog and, when that doesn’t work, to drop him off at a shelter, but they are unsuccessful. Eventually, Amy is left with no choice but to track down Rover’s previous owners and figure out how they were able to free themselves from this creature. This journey is how Amy meets the grizzled diva Miss Dola, who helps Amy and her family perform a ritual to weaken Rover. After a dramatic confrontation, they are able to drop him into the sea. He sinks to the bottom, gone for good. Or is he?

A key theme in Red Rover is dealing with bullies. A girl from school named Valerie Starr frequently makes fun of Amy, and Amy draws a direct comparison between this rival and Rover. In the latter half of the book, Amy is willing to do almost anything in her power to spend less time around her dog. She relishes her hours at school. She goes on walks. She spends extra time in the bathroom. “Anything that took time out of her morning, she was good at. Anything to keep her up here, on the second floor, away from him.” Amy, for her part, dislikes the person that she’s become. Once a dog-lover, she now catches herself hoping for Rover’s downfall, a relatable struggle for anyone who’s endured bullying. She just wants to be free.

Because Red Rover is told entirely from Amy’s perspective, frustration and fear are also key elements of the plot. While Katie blindly adores Rover and their science-minded parents don’t even consider psychic powers a possibility, Amy picks up on Rover’s sinister energy almost from the beginning. As the novel progresses, Amy becomes more and more frightened of Rover. This fear is what drives the plot forward and initially puts Amy at odds with her family. Readers will share Amy’s terror as suspense slowly builds, until the final confrontation at the end of the book where Amy’s “sharp, unspeakable terror curdle[s] into rage” and she must defend her younger sister from Rover’s attack.

Although Red Rover is a bit slow at times, the story of a girl who lives in fear in her own home will resonate to any child who has had to deal with a bully, especially one that they seemingly can’t escape. With believable characters and a strong final act, Red Rover presents a powerful narrative about standing up for yourself, protecting the people you care about, and following your gut even when no one else believes you.