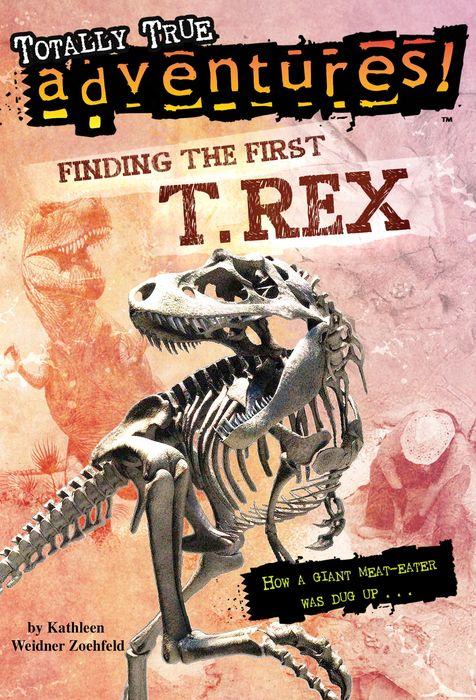 Other books by Kathleen Weidner Zoehfeld

“Among the cowboys,” Brown wrote in his notebook, “anyone who collected butterflies, insects of any kind. . . or fossils, was a bug hunter,” –Finding the First T. Rex

Famous dinosaur hunter Barnum Brown brought amazing skeletons and fossils to the museums. Ancient plant-eaters, three-horned Triceratops, Brown had found them all. But in 1902, he found a thrilling surprise. It was the jawbone of a strange creature. A brand-new dinosaur would shock the world—the mighty Tyrannosaurus rex!

The story of the first T. rex begins with Albert Bickmore, who founded the American Museum of Natural History in New York. Soon after the museum opened, the crowds stopped coming to the museum. To get people excited about coming to the museum, Bickmore knew they needed something exciting. So he hired Barnum Brown to go find dinosaur fossils. Readers may think reading about a museum and a fossil hunter would be boring. They would be wrong.

Readers may imagine that scientists who dig up dinosaur bones have a mundane life, but Finding the First T. Rex includes how Brown and other scientists were often in danger. Brown’s amazing discovery didn’t end with finding the bones. He also had to safely remove the fossils from the hard dirt and transport them to the museum. Once the fossils were at the museum it took another seven years to get the first Tyrannosaurus rex put together!

Finding the First T. Rex uses short chapters and explains some of the vocabulary, which makes the book accessible to reluctant readers. Large black and white illustrations appear every 5 to 9 pages. The illustrations will give readers an understanding of the size and the scope of the T. rex. While the book is easy enough for young, fluent readers, the content will be interesting to older readers as well. The back of the book contains more information about dinosaurs.

Finding the First T. Rex explains how many people worked together to find the first T. rex fossil and display it for the public. The story highlights the educational importance of museums as well as demonstrates how perseverance was essential in finding the T. rex. Young readers who’d like to take a step back in time and learn more about dinosaurs should also check out Don’t Disturb the Dinosaurs by Ada Hopper.

Other books by Kathleen Weidner Zoehfeld

“Among the cowboys,” Brown wrote in his notebook, “anyone who collected butterflies, insects of any kind. . . or fossils, was a bug hunter,” –Finding the First T. Rex