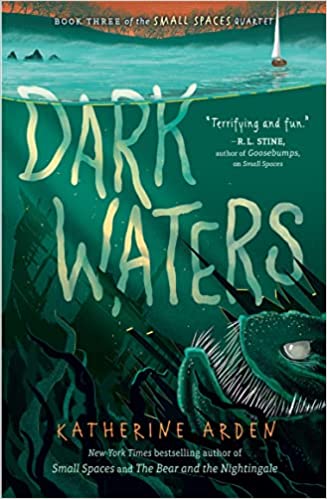 “Why aren’t you guys freaking out more? There’s a giant water snake trying to eat us, we’re stuck in a tree, and there was a guy just here who wanted to ax us, and you think he might be a ghost, and this is awful,” Phil asks. –Dark Waters

Until next time. That was the chilling promise the smiling man made to Ollie, Coco, and Brian after they last outsmarted him. And as the trio knows, the smiling man always keeps his promises. So when the lights flicker and a knock sounds at the door, there can only be one explanation: he’s back and a frightening new game is afoot.

But before the three friends can unravel the smiling man’s latest nightmarish scheme, they set sail on Lake Champlain, where it’s said Vermont’s very own Loch Ness monster lives. Brian is thrilled. He hasn’t sailed since visiting family in Jamaica, and even the looming threat of the smiling man can’t put a damper on what is guaranteed to finally be a day of fun—even if it is awkward being stuck on a boat with his former best friend, Phil, and his new best friends, Coco and Ollie. But when the crew finds themselves shipwrecked on a deserted island and hunted by a monster on both land and sea, fun becomes the last thing on their minds. The smiling man has at long last set the stage for a perilous rematch. But this time, Brian is ready to play.

Unlike the first two installments of the Small Spaces Quartet, Dark Waters’ worldbuilding isn’t as believable. When the kids go through a rain squall, they are transported behind the veil. However, at first, the kids refuse to believe they are in danger. While the story implies that the smiling man is responsible for the kids’ plight, he never makes an appearance. Instead, the ghost of a man who died hundreds of years before is one of the central figures. While the ghost’s story thread explains the mysterious island, the man’s appearance does little to advance the plot. Likewise, Brian’s friend Phil is added to the cast of characters. However, he does not add any depth to the story.

Readers will also miss Ollie, who quickly fades from the story because she refuses to leave her sick father’s side. This allows Brian to take center stage. Unfortunately, Brian doesn’t use his knowledge to beat the smiling man. Instead, Brian and his friends do little more than run from both the ax man and the snakes. Brian never interacts with the smiling man. Even though Brian keeps his friends safe, but he doesn’t discover a way to get off the island.

Through Phil’s character, the story hints that honesty is important. This is reinforced when “Brian belatedly realized that if you told a lot of lies, even if it was for a good reason, like trying to keep people safe, it started to get hard to trust that other people were telling the truth.” Despite this, Brian and the other kids never tell the adults the true reason they are on the island. Another negative aspect of the story is that Ollie makes a bargain with smiling man in order to save her father’s life. However, she makes this decision without consulting anyone else, she hides her actions until the last moment, and the conversation between Ollie and the smiling man is not described. The conflicting message is confusing and leaves the reader wondering what would have happened if the kids had been honest.

In the end, Dark Waters is disappointing because the kids do little to solve the problems that arise. Plus, the characters’ behaviors are not consistent. Readers who loved the first two books in the story may have a difficult time wading through Dark Waters, especially because the dynamic between Ollie, Coco, and Brian changes which is one of the main appeals of the series.

“Why aren’t you guys freaking out more? There’s a giant water snake trying to eat us, we’re stuck in a tree, and there was a guy just here who wanted to ax us, and you think he might be a ghost, and this is awful,” Phil asks. –Dark Waters