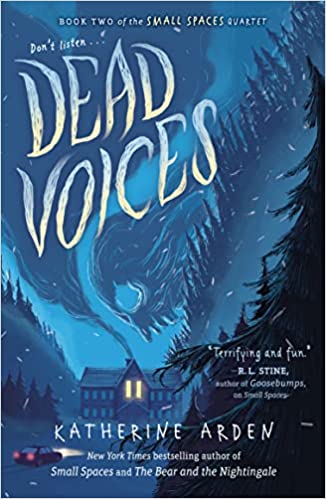 “I believe we are in danger. We cannot leave. We don’t have light, we don’t have heat, and the ghost upstairs is strong, and will only grow stronger as the sun sets. I do not know what she wants. Are you willing to bet that she’s harmless,” Mr. Voland. –Dead Voices

Ollie, Brian, and Coco have had their fill of frightening experiences. After their narrow escape from the smiling man and his sinister scarecrows during their class field trip last fall, they are ready for some fun. Skiing at Mount Hemlock sounds promising, but their enthusiasm quickly dims as a snowstorm traps them at the loge with only their parents and Mr. Voland, a mysterious ghost hunter, for company.

Strange things start happening. Coco is seeing shadowy figures, Ollie is having nightmares about frostbitten girls, and Brian is positive that the stuffed bear in the lobby was on its hind legs when they arrived—not on all four.

Their fun-filled trip is quickly turning into another terrifying encounter with another dimension. There are ghosts at Mount Hemlock and their voices are demanding to be heard, but the price of listening may be too high.

In this haunting follow-up to Small Spaces, Ollie, Coco, and Brian must rely on their friendship and sharp minds if they are to survive their next harrowing adventure. Readers who are ready to be frightened will enjoy seeing Ollie and her friends go up against the smiling man one more time. However, Dead Voices increases the fear factor because both the living and the dead use deception to try to lure the children into Mother Hemlock’s frosty arms.

Unlike Small Spaces, Dead Voices focuses more on Coco’s point of view. While Ollie plays a main role in the story, Brian disappears early on, leaving Coco responsible for saving Ollie. This shift gives the book a new perspective and allows the reader to see how Coco is often misjudged because of her small size. Because Coco appears childlike, she is underestimated. However, she is a master at chess, which has taught her to look at a problem from many angles. It is this skill that allows Coco to beat the smiling man and free Ollie.

In the first book of the Small Spaces Quartet, Ollie and her friends spent most of their time running from danger. However, Dead Voices increases the suspense by increasing the danger. In addition, the ghosts are more frightening both in appearance and in their actions. Ollie meets a ghost, who appears to be friendly and helpful, but instead leads her into a trap. And when the smiling man makes an appearance, the reader learns that he is capable of completely changing his appearance, which allows him to disguise himself and trick Ollie into being trapped behind the mirror. To make matters worse, the smiling man puts all the other adults into an unwakeable sleep, thus making the kids rely on themselves.

Dead Voices is an action-packed ghost story that includes mystery, ghosts, and a deceptive villain that readers will love to hate. The simple plot leads readers into a creepy world where Mother Hemlock wants to make Ollie sleep forever. Dead Voices is perfect for middle-grade readers who want to be frightened without the graphic images that often appear in YA books. Readers who enjoy scary stories should also read Nightbooks by J.A. White and The Forgotten Girl by India Hill Brown

“I believe we are in danger. We cannot leave. We don’t have light, we don’t have heat, and the ghost upstairs is strong, and will only grow stronger as the sun sets. I do not know what she wants. Are you willing to bet that she’s harmless,” Mr. Voland. –Dead Voices