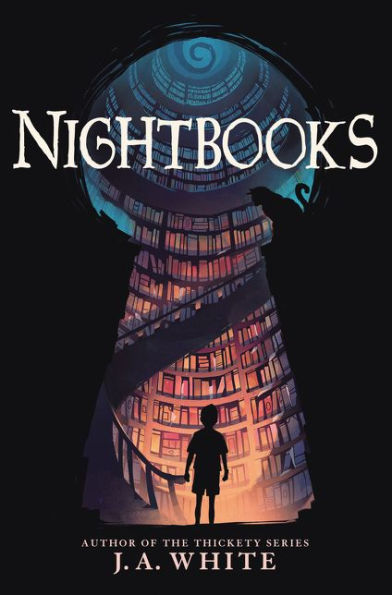 Alex is considered a bit odd by the other kids at school because he likes to spend his time writing scary stories. Disheartened by their constant teasing, Alex sneaks out of his apartment one night to burn his notebook. On the way to the boiler room, the elevator mysteriously stops on the fourth floor. Before he knows it, a witch named Natasha has imprisoned him in her magical apartment. Natasha loves stories, and Alex’s storytelling abilities are what got him captured—and what will keep him alive.

The witch has one other prisoner, a girl named Yasmin. She has long given up hope of escape and tells Alex that to stay alive he will have to continue telling Natasha hair-raising tales. But Alex is running out of story ideas, and he can’t focus on writing while consumed with thoughts of escape.

Nightbooks blends the fairy tale elements of Hansel and Gretel into a modern story that readers will love. Unlike Disney’s version of fairy tales, Nightbooks keeps the dark elements alive by delving into how a person becomes evil. This action-packed story is full of frightening elements, interesting characters, and several twisty surprises. As Alex, Yasmin, and a cat named Lenore join together to defeat Natasha, readers will cheer as the three try to stay alive and find a way to escape.

Throughout the story, Alex reads his own scary tales, adding another interesting element to Nightbooks. His stories do not distract from the main story, but add more frightening elements—dead children, vampires, and an evil teddy bear. Both Alex’s stories and the main narrative are creepy and scary, but the descriptions are not gory.

Many younger readers will relate to Alex, who feels like he is abnormal and does not fit in. A theme of normalcy is integrated into the story through Alex’s struggle with his desire to be like everyone else. In the end, he realizes, “So what if I write scary stories? I might hurt someone with nouns and adjectives, but I would never hurt someone for real.”

Readers will come away from this story with a message about the importance of courage, compassion, friendship, and accepting yourself. For those who like a fast-paced, frightening story, Nightbooks is a superb scary story for middle school readers.

Violence
• When Yasmin accidentally feeds a magical plant the wrong food, it produces “danglers.” When a dangler opens, a creature comes out. “Two red pinchers burst through the outer layer of the sac and dug into the wood, gaining purchase and dragging the rest of the body to freedom.” The creature shreds anything it touches. A cat named Lenore tries to catch the creature. “More sounds. Hissing. A buzzing noise, like a flying insect. A pot shattering. Lenore screeched in pain.” More creatures are born, and the kids try to fight them off. Alex “felt a sharp pain in his ankle. He kicked his foot and a furry lump sailed across the room. . . something landed on his lower back and immediately began to climb higher, claws tearing through his shirt and into skin.” The attack takes place over the span of a chapter.
• The witch gets angry with Lenore. “The witch opened her hand and a tiny fireball shot at Lenore. It seared the back of her fur, leaving a black streak against the orange. Lenore yowled in pain.”
• When the witch gets upset at the children that she has captured, she turns them into porcelain dolls.
• Alex tells a story about two brothers. The younger brother dies but comes back one night. The older brother, who was sleeping, felt “something jab him again, harder this time. The mattress lifted into the air for a moment before crashing back down onto its frame.” When Keith tried to get out of the bed, “a hand grabbed his ankle. It was cold and small but strong enough to jerk him off his feet. Keith crashed to the floor.” The story implies that the dead child takes over his brother’s body.
• When Alex, his friend, and the cat go into a passage, a creature greets them. “It had the body of a horse, but its black hair was missing in patches, revealing large swatches of oozing skin.” The creature attacks. “Alex screamed, certain that he was about to be impaled in several places, but the sharp tips of the horns fell just short of his body.”
• Aunt Gris and the witch Natasha fight. “Natasha snarled with frustration and unleashed a barrage of spells, one after the other; choking mist, nooses made of flame, twin skeletons brandishing iron swords. . . Aunt Gris leaped across the room and landed on her back. . .” There was a “short scream of pain followed by horrible crunching sounds—and then nothing at all.”
• At one point, the witch, “seemed determined to fit Yasmin’s entire head in her mouth.” When Alex throws a book of stories into the furnace, the witch tries to save the book, and “Yasmin shoved her from behind. [She] fell forward into the flames.”

Supernatural
• A witch lives in a magical apartment that entices children to enter. “The apartment does what it can to get you inside. Different for everyone . . . Traditionally, it’s some sort of food that draws them. Kids are always thinking with their stomachs, you know.”
• The apartment needs dark magic to stay alive. The witch wants Alex to tell scary stories because “the thing about dark magic, though—it thrives on nightmares. . . When you read it a scary story, you soothe its aches and pains. And then it can rest easy again—at least for a little while.”
• The witch has a business that sells “magic-infused oils. . . A hex for that annoying neighbor, extra luck for a weekend getaway to Atlantic City. And love oils.”
• Alex writes a story about a girl who turns into a vampire when her reflection was stolen.
• Alex meets the original witch, Aunt Gris, who “ate children and devoured their youth.” The witch that captured Alex had “slipped a sleeping potion into [Aunt Gris’s] tea.” Natasha keeps Aunt Gris alive, but asleep.
• When Aunt Gris wakes, she is deformed. “Its fingers were candy canes ending in chiseled nails that looked very, very sharp. They twisted and cracked, testing their newfound freedom. . . Her ears and nose were in the expected places, but her face drooped like melted taffy, and her eyes were gold-foiled chocolate coins pressed deeply into malleable flesh.”
• When Aunt Gris dies, her magic dies and the porcelain children come back to life. “They recalled their names and everything about their lives up until the moment they entered apartment 4E. . . some of the children had been missing for a decade or more and hadn’t seemed to age in the intervening years.”