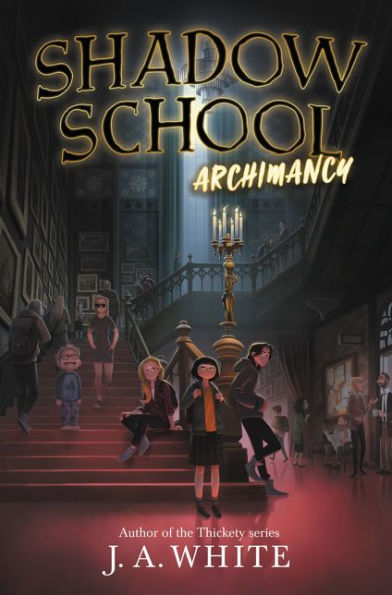 “My mom said if you want to be someone’s friend, bake them something. It shows you mean business,” Agnes. –Shadow School

Cordelia Liu wasn’t happy to leave California. As soon as she stepped into Shadow School, she knew things were going to be different. Still, she didn’t expect the school grounds to be filled with ghosts.

Cordelia soon realizes she’s not the only one who can see the ghosts; her new friend Benji can too. Together with super-smart Agnes, the trio are determined to find out why the ghosts are there and whether there’s a way to set them free.

But the school was created with more sinister intentions, and someone is willing to go to extreme lengths to ensure that the ghosts remain trapped forever. Cordelia and her friends don’t know who they can trust. Do they need to fear the living, the dead, or both?

Shadow School isn’t just another ghost story. White creates a unique setting that is spooky without being overly frightening. Cordelia and her friends are somewhat stereotypical, but readers will still enjoy the brainy Angus, the sullen cute Benji, and the curious Cordelia. As Cordelia and her friends help the ghosts leave Shadow School, readers may be slightly disappointed that the ghosts’ stories lack detail. Instead of delving into the ghosts’ personal stories, the ghosts are quickly dispatched.

Even though Cordelia solves each problem quickly, readers will still enjoy the mystery behind Shadow School as well as the character’s interactions. Since Cordelia is a new student at Shadow School, she struggles to make friends. Throughout the story, Cordelia learns the importance of forgiveness as well as the importance of being friends with people who are different than her.

Cordelia is far from a perfect character, but her flaws make her relatable. She has awkward moments with her parents, she isn’t sure who she can trust, and she doesn’t always know what to do. Cordelia thinks about ignoring the ghosts, but decides to continue helping them because “easy choices were seldom the right ones.”

Shadow School has just the right amount of mystery, friendship, and frightening scenes to keep middle school readers engaged. Readers will have to use context clues to decipher difficult vocabulary, such as pealegume, tessellating, assuage, and spile. Told from Cordelia’s point of view, Shadow School gives readers an exciting peek into a paranormal world. Readers who enjoy Shadow School will also enjoy Nightbooks, another spooky story written by J.A. White.

“My mom said if you want to be someone’s friend, bake them something. It shows you mean business,” Agnes. –Shadow School