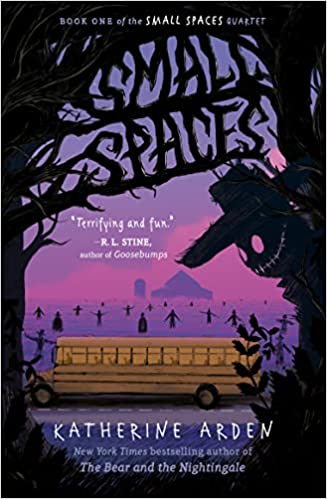 At night they will come for the rest of you. It’s with this ominous warning that eleven-year-old Ollie and her two friends, Coco and Brian, set out on a chilling adventure in the woods with nightfall fast descending and the ever-watchful eyes of scarecrows on their backs.

What began as an unremarkable school trip to a nearby farm soon becomes a frightening journey into the world behind the mist. In order to survive and not remain trapped there forever, Ollie and her friends need to be quick on their feet as they work to unravel a hundred-year-old mystery, save their classmates, and beat the villainous smiling man at his own game.

When night falls, Ollie and her friends must find small spaces to hide from the scarecrows, who follow the smiling man’s commands. During the daylight hours, the three friends search for a way back into their world. Along the way, they meet several ghosts, who were unwilling to leave their loved ones who the smiling man turned into scarecrows. However, before Ollie meets the ghosts, she finds Beth Webster’s book where she chronicled the story of her family and explains how the smiling man was able to turn her husband into a scarecrow.

Beth Webster’s story connects to Ollie’s own story. In Beth’s story, her mother-in-law was distraught over her son’s disappearance. In order to appease his grieving mother, Beth’s husband Johnathan makes a deal with the smiling man. The smiling man brings Johnathan’s brother back to life, but Johnathan then becomes the smiling man’s servant. Similar to Beth, Ollie is also grieving the loss of a loved one—her mother. However, Ollie doesn’t let her grief overshadow her life. When the smiling man offers to bring Ollie’s mom back to life, Ollie doesn’t accept the deal. Instead, she gives up the deepest desire of her heart in order to break the curse and restore her classmates.

While Small Spaces is predominantly a ghost story, it also touches on the theme of grief. Through her experiences, Ollie learns that her mother’s words and advice will continue to help her navigate life. Even though Ollie still grieves her mother’s loss, she is learning to find joy in life again.

Small Spaces will appeal to readers who want a creepy, scary story without bloodshed and gore. The easy-to-read story keeps readers on edge as the smiling man’s secrets are revealed. The story’s conclusion is a little confusing as it tries to piece together the stories of the past with the stories of the present.

While Ollie and her friends are not well-developed, they are an interesting group that learns to appreciate each other’s differences. If you’re looking for a fast-paced ghost story that will keep you guessing, then grab a copy of Small Spaces. Beware: when you get to the end, you will want to find out what happens in the next book, Dead Voices, in which Ollie and her friends get trapped in a haunted snow lodge.