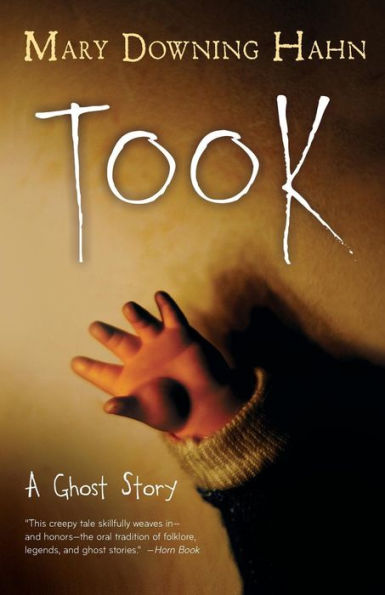 When Daniel and his sister move to rural West Virginia, Daniel doesn’t think things can get any worse.  The students at his new school torment him. The teachers are indifferent. He has no friends. His parents are unhappy. And to make matters worse, his sister spends all of her time talking to her doll.

When Daniel hears stories of Old Auntie, who kidnaps a girl every 50 years, he thinks it’s just an old tale used to frighten children. But then he feels someone watching him. He sees strange shadows. And when his sister suddenly disappears, Daniel is convinced Old Auntie isn’t just a story.

As Daniel’s parents lose themselves in grief, Daniel decides he must face his fears and bring his sister home. With the help of his neighbor and one of Old Auntie’s descendants, Daniel fights for his sister’s freedom.

Right from the start, Took: A Ghost Story will capture the reader’s attention. Young readers will be able to relate to Daniel, who feels as if all of life’s decisions are out of his control. Although Daniel clearly cares for his parents and sister, his frustration with them is understandable. Daniel is a likable character, who faces his fears and in the end, brings his family back together.

The story is primarily told from Daniel’s point of view but has several chapters told from Old Auntie’s point of view. This adds suspense to the story and helps develop the creepy mood. This is not a book to read with the lights out. Because Old Auntie and Bloody Bones are described in such realistic, vivid detail, readers will be entertained and frightened.