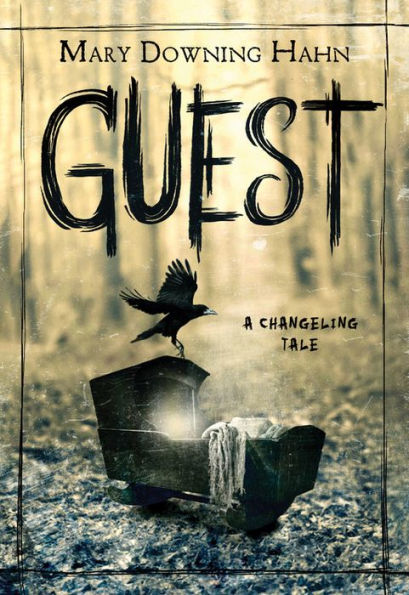 “Best learn to mind your tongue, or it will forever bring you trouble,” Granny Hedgepath. –Guest: A Changeling Tale

Mollie knows that it’s dangerous to praise a baby. The Kinde Folke, who are anything but kind, may overhear and snatch the beautiful child away. Mollie loves her baby brother Thomas and somehow flattering words escape. She knows her baby brother could be snatched, but she isn’t expecting a hideous changeling to take his place. When her brother disappears, her father leaves town and her mother tries to keep the changeling alive. Mollie’s mother hopes that the Kinde Folke will take the changeling home and return Thomas.

Mollie watches the joy and strength leave her mother. In the hopes of saving her family, Mollie decides to sneak away and return Guest (the changeling) to the Kinde Folke. But the Kinde Folke do not want Guest back, and they will do everything in their power to keep Mollie from finding them. Determined, Mollie journeys over mountains and through forests filled with otherworldly foes. Can Mollie find the treacherous Kinde Folke and convince them to let go of her brother?

Mary Downing Hahn weaves a tale of frightening fairies who use trickery and violence to keep Mollie from finding her brother. Although the Irish folklore is interesting, none of the characters in the story are likable. Mollie is spoiled, mean, and says hateful words. The story hints that Guest’s father cares about him, but the man only steps in to help when Mollie and Guest are in danger. Even though Guest is described as a disgustingly ugly changeling, he grows as a person and realizes that his previous actions were wrong. Readers may be put off by the host of unlikeable characters.

As Mollie searches for her brother, she continues to make the same mistakes over and over again. If it wasn’t for the help of the traveler and sympathetic Kinde Folke, Mollie would have surely met her demise. In the end, Mollie is reunited with her brother; however, he is so mean and ill-tempered that the reader will wish that the fairy queen had sacrificed him as she had planned.

Mollie travels through the forest and has to overcome many difficulties. The changing relationship between Mollie and Guest will give readers hope. Throughout the story, several people ask Mollie, “Why must you speak your mind without giving a thought to what you say?” By reading Mollie’s story, readers will understand the need to think before they talk. Readers who are interested in folklore and the darker side of fairies will enjoy Guest: A Changeling Tale. Readers interested in folklore with mischievous and often dangerous characters should try better alternatives, such as 13 Treasures by Michelle Harrison or The Spiderwick Chronicles by Tony DiTerlizzi and Holly Black.

“Best learn to mind your tongue, or it will forever bring you trouble,” Granny Hedgepath. –Guest: A Changeling Tale