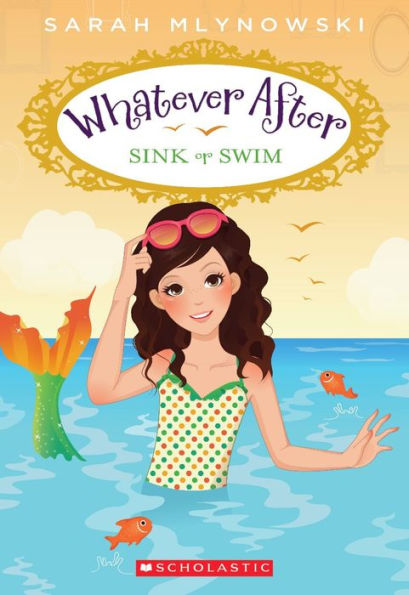 “I love my family but I don’t want to leave the surface. Prince or not, it’s my home. I love to walk and dance... And have you tried a cheeseburger with mustard and that yellow-y American cheese? They’re amazing,” Lana. –Sink or Swim

Abby and Jonah discovered a magic mirror that takes them into fairy tales. The first two times they traveled to a fairy tale and changed the story by accident. This time, Abby and Jonah promise not to change the fairy tale, but when the magic mirror pulls them into the Little Mermaid’s story, they are determined to help the Little Mermaid because the original story doesn’t have a happy ending.

Instead of being a fun retelling of The Little Mermaid, Sink or Swim has several flaws. In the first few chapters, Abby gives a summary of the first two books in the series. Unfortunately, the summary is uninteresting and jumps from topic to topic. Unlike the previous book, Jonah rarely appears. When he does, he spends all of his time arguing with his sister. Plus, the story contains some inconsistencies that stronger readers will notice. For example, Abby is afraid of the water and has difficulty swimming. Yet, she is able to swim underwater for several hours in order to find the sea witch.

Once Abby and Jonah get to the Little Mermaid’s world, the siblings struggle to find the mermaid. When they do find her, they learn that her name is Lana and that she is determined to be with the prince. When Lana meets the prince he quickly proposes, but then he backs out when he learns that Lana is a mermaid. Despite this, Lana still gives up everything in order be with the prince. Once Lana appears on land with legs, the prince says that he will honor his proposal. Instead of being a cute romance, Lana soon discovers that the prince is shallow. The prince says Lana “just needs to smile, dance, and be beautiful.” When Lana runs from the altar, the prince chooses a girl from the audience and marries her on the spot.

Even though Abby meets all the characters from the original fairy tale, the fairy tale characters are flat. Lana is convinced that she’s in love with the prince and refuses to listen to anyone’s advice. Abby warns Lana, “You’re going to lose everything! Your tongue! Your life! You can’t make a deal with the sea witch! You can’t give up everything that makes you who you are. It’s just not right.” Despite this, Lana still makes a dangerous deal with the sea witch that could end in death.

Fans of Disney’s The Little Mermaid will wish they left Sink or Swim on the library shelf. Sink or Swim doesn’t have any of the charms of Disney’s The Little Mermaid, and all of the characters are lacking depth. The only redeeming value of the story is that it highlights the importance of being satisfied with your life and shows that love at first sight isn’t true love. If you’re looking for more fairy tale stories, Fairy Tale Reform School by Jen Calonita would be a better choice.

“I love my family but I don’t want to leave the surface. Prince or not, it’s my home. I love to walk and dance... And have you tried a cheeseburger with mustard and that yellow-y American cheese? They’re amazing,” Lana. –Sink or Swim