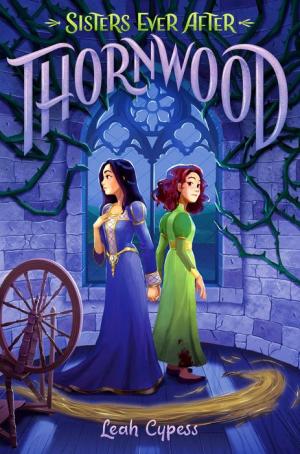 “Had we even thought about anyone but ourselves? We had acted like this was our story. Like the other people in it—everyone in this castle, and outside it, too—were minor details we didn’t have to pay attention to,” Briony. –Thornwood

For years, Briony has lived in the shadow of her beautiful older sister, Rosalin, and the curse that has haunted her from birth. According to the curse, on the day of her sixteenth birthday, Briony would prick her finger on a spindle and cause everyone in the castle to fall into a 100-year sleep. When the day the curse is set to fall over the kingdom finally arrives, nothing—not even Briony—can stop its evil magic.

You know the story.

But here’s something you don’t know. When Briony finally wakes up, it’s up to her to find out what’s really going on, and to save her family and friends from the murderous Thornwood. But who is going to listen to a little sister?

Thornwood looks at the classic tale of Sleeping Beauty through the eyes of the little sister. While the villain in the story is clearly the fairy queen who cast the spell, she doesn’t make an appearance until the very end. Instead, the suspense is created by the Thornwood branches that attack the castle’s inhabitants. When Briony and a group of acquaintances try to defeat the Thornwood branches, a fairy tells Briony, “The Thornwood will disappear once Rosalin dies in it.” At one point, Rosalin considers sacrificing herself to the Thornwood to save the people she loves. However, Briony is the true hero of the story because she perseveres until she finds a way to defeat the fairy queen without sacrificing her sister.

Adding Sleeping Beauty’s sister to the story is an interesting premise, however, the sister relationship is spoiled by Rosalin, who has few redeeming qualities. For the most part, Rosalin is too caught up in her looks and the prince to notice her sister. When Rosalin talks, her statements are mean and dismissive. For example, when Briony tries to help Rosalin, Rosalin tells her, “Why don’t you just leave. Nobody needs you here. Go annoy someone else.” Plus, Rosalin constantly makes fun of Briony’s hair describing it “like mud that’s been stirred with bathwater” or “a mass of frizz that’s been hit by a lightning bolt.” Anyone who has been a victim of bullying will be saddened by Rosalin’s behavior, especially because Briony already feels ignored and unimportant. Despite this, Briony never gives up on trying to help her sister.

In the end, the Royal family is not portrayed in a positive light. The parents are clueless fools, Rosalin is self-centered, and the family doesn’t consider the feelings of others. However, by the end, Briony wonders, “Had we even thought about anyone but ourselves? We had acted like this was our story. Like the other people in it—everyone in this castle, and outside it, too—were minor details we didn’t have to pay attention to.” The conclusion has a typical happy ending that attempts to show that your station in life doesn’t determine your worth. However, if you’re looking for a fabulous fairy tale, you should leave Thornwood on the shelf and instead read The Prince Problem by Vivian Vande Velde or the Royal Academy Rebels Series by Jen Calonita.

“Had we even thought about anyone but ourselves? We had acted like this was our story. Like the other people in it—everyone in this castle, and outside it, too—were minor details we didn’t have to pay attention to,” Briony. –Thornwood