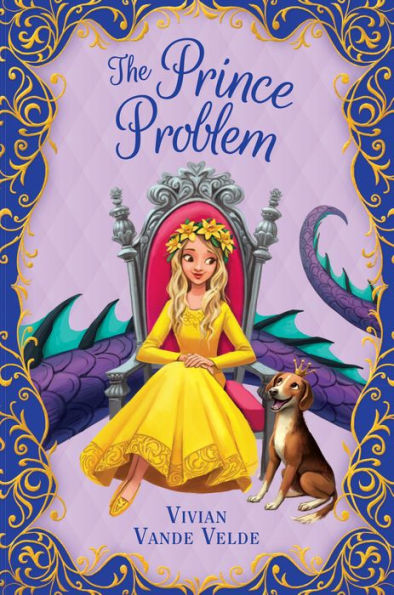 “And where had Princess Amelia learned this obscure information about all these exotic animals, anyways? She must spend all her time with her nose in exactly the kind of books he avoided: the fact-filled kind that were supposed to teach you something,” Telmund. – The Prince Problem

Prince Telmund loves to read fables. But in every fable, the oldest children are always bullies. That’s why Telmund was just a little upset when his youngest brother was born. One day, Telmund was racing around, trying to keep his little brother out of trouble, when a nasty witch accused Telmund of being a bully. In an effort to teach Telmund a lesson, the witch cursed him. Now, every time he falls asleep, he will transform into a different type of animal.

Princess Amelia doesn’t care for fairy tales, but she loves facts. The practical princess has a wide range of skills, but none of them will help her escape the ball her parents have planned. Her idealistic parents want Amelia to choose her future husband. Amelia’s parents believe in love at first sight and happily ever after’s. Amelia knows that bad things happen. That’s why she isn’t surprised when Prince Sheridan has her kidnapped.

When Prince Telmund discovers that Princess Amelia is in trouble, he vows to save the princess. But how can a dreamer prince with no skills save the day? Is there any way the two can work together and defeat the dangerous Prince Sheridan?

The Prince’s Problem is a fun, imaginative twist on a fairy tale that has interesting, well-developed characters. When Telmund changes into different animals, he understands that he has the instinct of the animal, and although he understands this, he cannot ignore the animal instincts. Seeing the world through the animal’s point of view adds interest and humor to the story. When Telmund discovers a princess in trouble, he’s determined to help despite his transformations. Telmund wanted to be “like the heroes in stories, who do brave deeds, who help those in need, who keep trying and never give up, and who are unmindful of what danger they might get into if they do the right thing.”

Amelia is not a typical princess. Instead of dresses and jewels, she’s interested in learning about facts. Although she is unconscious for the first part of the story, when she finally awakens, she comes across as a bit bossy. However, as the story progresses, she learns to respect Telmund despite his idealistic nature. When Amelia and Telmund interact, comical misunderstandings and mayhem arise.

In the end, both Amelia and Telmund learn the importance of understanding others, and that “it is unfair to make judgments based on appearance.” Unlike most fairy tales, the prince and the princess must work together. They must use both facts and fairy tale bravery in order to save each other. Although the story is a bit predictable, reading The Prince’s Problem is enjoyable because of the unique aspects of Amelia and Telmund. For those wanting a fresh look at a fairy tale, The Prince’s Problem will entertain and delight.

“And where had Princess Amelia learned this obscure information about all these exotic animals, anyways? She must spend all her time with her nose in exactly the kind of books he avoided: the fact-filled kind that were supposed to teach you something,” Telmund. – The Prince Problem