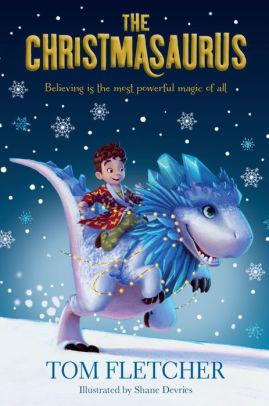 “That’s the wonderful thing about Christmas. Every second away from last Christmas is one second closer to the next,” Mr. Trundle. –The Christmasaurus

Once upon a time—long, long ago, when dinosaurs roamed the Earth—an egg rolled away from its mother and landed in the ocean, where it froze solid and stayed peacefully for thousands of years. Then, one day Santa and his elves discover the frozen egg, and Santa sits on it to see if it will hatch. But he would’ve never guessed what’s inside. . . . a dinosaur!

Meanwhile, a young boy named William Trundle has only ever wished for one thing for Christmas: a dinosaur! So, when Santa accidentally gives William the real Christmasaurus instead of a stuffed replica, it’s the BEST CHRISTMAS EVER! That is until Hunter, an evil man known, decides a dinosaur will be the perfect addition to his collection.

The story draws readers into the text by using large text for some of the sillier words, such as “big,” “astronomically,” “intergalactically,” and “outer spacey-wacey big!” The black and white illustrations have wonderful details and show the characters’ emotions. Although younger readers may be interested in the topic, the difficult vocabulary and long, descriptive passages may be hard for some readers to tackle.

The Christmasaurus tackles themes of loneliness, friendship, and seeing things from another person’s perspective. Both the Christmasaurus and William are lonely because they are different from others. However, unlike the Christmasaurus, William is the target of bullying. Through William’s experiences, the story shows how words are “the most powerful weapon of all.” Brenda uses nasty words that “infected the whole school,” making everyone avoid William. Soon William feels lonely and different. “Brenda had planted those awful words like rotten seeds in William’s brain, and they were beginning to grow into rotten thoughts.” However, in the end, William and Brenda both learn valuable lessons about kindness.

Despite William’s difficulties, William remains kind and his true desire is that his father finds happiness. The heartwarming story brings Santa’s magical world to life. However, The Christmasaurus is never predictable and has several surprising plot twists. In the end, The Christmasaurus is a sparkly story that teaches the importance of putting others first.

“That’s the wonderful thing about Christmas. Every second away from last Christmas is one second closer to the next,” Mr. Trundle. –The Christmasaurus