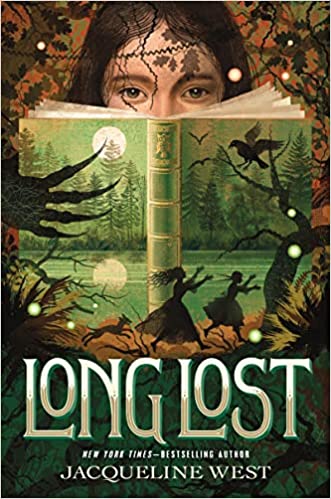 "The librarian, Ms. Miranda, “reached into the pocket of her shirt. Fiona’s first thought was that Ms. Miranda was pulling out a gun. But that was ridiculous. A librarian would choose a quieter weapon. Something like poison or a nice tight gag.”–Long Lost

Eleven-year-old Fiona has just read a book that doesn’t exist.

When Fiona’s family moves to a new town to be closer to her older sister’s figure skating club—and far from Fiona’s close-knit group of friends—nobody seems to notice Fiona’s unhappiness. Alone and out of place, Fiona ventures to the town’s library, a rambling mansion donated by a long-dead heiress. There she finds a gripping mystery novel about a small town, family secrets, and a tragic disappearance.

Soon, Fiona begins to notice strange similarities that blur the lines between the novel and her new town. With a little help from a few odd Lost Lake locals, Fiona uncovers the book’s strange history. Lost Lake is a town of restless spirits, and Fiona will learn that both help and danger come from unexpected places—maybe even from the sister she thinks doesn’t care about her anymore.

While Long Lost focuses on Fiona, the story also jumps back in time to tell the story of two sisters—Hazel and Pearl. Fiona finds a mysterious book that keeps disappearing and reappearing; the book gives her a look into Hazel’s and Pearl’s lives. Fiona’s side of the story starts off slowly as her most pressing conflict is getting a library card, but soon the action picks up and the reader will get hooked on the mystery of what caused Hazel to disappear. Another element that builds suspense is the town’s belief in the Searcher, a mysterious black-draped apparition that steals children. While the plot is interesting, with all the different story elements, the plot may be difficult for some readers to follow.

While the story contains plenty of mystery, it is also a story about sisters. Both sets of sisters—Hazel and Pearl, and Fiona and Arden—get so angry that they wish the Searcher would take their sibling. However, like all siblings, the girls learn the importance of working out their problems and being supportive of each other. Unfortunately, for Hazel and Pearl, this realization doesn’t happen until after they have died and meet up again as ghosts.

While the main characters, Fiona, Hazel, and Pearl are not necessarily relatable, they are well-developed and interesting. Anyone who has siblings will understand the girls who often fight, say mean things to each other, and at the same time love each other.

At times, Long Lost is a spooky story that will have readers’ hearts pounding. Readers will also be trying to fit all the pieces of the puzzle together. The one downside of Long Lost is the conclusion, which is rushed and leaves readers with questions. However, the story ends on a hopeful note with Fiona and her sister, Arden, repairing their relationship. Middle-grade readers who love the idea of ghosts, but don’t want the frightening elements of many young adult novels will enjoy Long Lost. If you’re looking for more spooky, fun ghost stories, check out the Shadow School Series by J.A. White.

"The librarian, Ms. Miranda, “reached into the pocket of her shirt. Fiona’s first thought was that Ms. Miranda was pulling out a gun. But that was ridiculous. A librarian would choose a quieter weapon. Something like poison or a nice tight gag.”–Long Lost