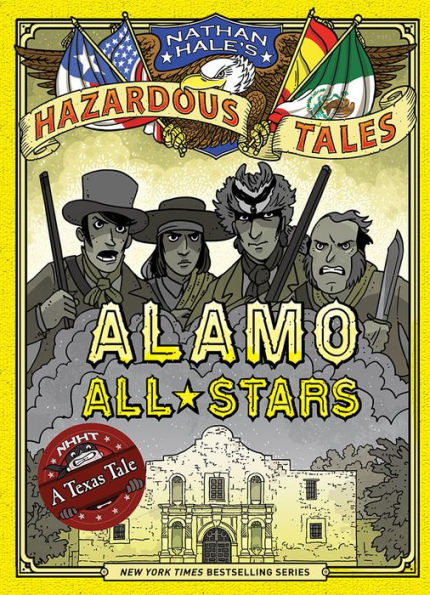 Nathan Hale tells the tale of the Texas Revolution. In the early 1800s, Texas was a dangerous place. The Mexican government, Native Americans, and settlers from the United States fought over the land.  The tale begins when “land pirates” began moving to Texas. It also covers the Alamo and the victory over Santa Anna at the Battle of San Jacinto.

The tale includes Stephen F. Austin, who led the charge to settle the frontier. Other interesting characters who make an appearance include the following: Patrick Jack, William Barret Travis, Jim Bowie, and David Crockett. Readers will learn about politics, military action, and prominent people. At the end of the book, maps and biographies give more historical insight.

Designed for reluctant readers, Alamo All-Stars brings history to life. Because Texas history is complex and full of battles, readers may have a difficult time keeping all of the names straight. Alamo All-Stars details many different battles. Although the pictures are not graphic, there are many battle scenes and a lot of death.