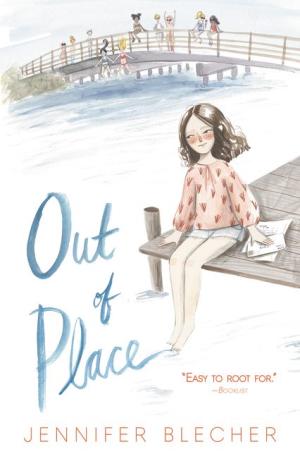 “I am the sky and this traffic is the rain. Remember that, Cove. You are the sky. Whatever is happening is just the weather. It will pass,” Cove’s mother.  –Out of Place

Cove Bernstein’s life has gone from bad to worse. After her best friend Nina moves from the island of Martha’s Vineyard to New York City, Cove is bullied more than ever by her classmates, Amelia and Sophie.  Without Nina, Cove has become the center of a bullying campaign. Cove tries to find a way to leave the island, but her mother refuses to leave, saying places outside of Martha’s Vineyard have “the never-ending pressure to be a certain person.”

Cove finds the chance of a lifetime to visit New York by entering herself in a kids-only fashion competition. Cove has little experience in sewing, but her friend in the retirement home, Anna, teaches her the basics. The plot thickens when Jack, a boy from her school, starts appearing wherever she goes. Then, she makes a terrible mistake – one that she thought she could not undo.

Told in an easy-to-read fashion, Out of Place truly captures a long-distance friendship as well as a friendship found in an unexpected place. Many readers will relate to Cove as she starts the school year without many kids to call friends. Despite their distance, Cove and Nina remain friends by writing letters to each other. The letters between Cove and Nina show their enduring friendship and summarize the events in their respective lives, which helps the reader understand the effort needed to keep a long-distance friendship.

Nina is less developed since she primarily appears through letters, but the letters about her life in New York City allow the reader to take a break from Cove’s days at school and to later reengage in the happenings of Cove, back at Martha’s Vineyard. Black-and-white spot art appears at the start of each chapter. The illustrations in Cove’s letters show the influence of the island’s residents on her, which is contrasted by Cove’s desire to leave the island through any means while dealing with Amelia and Sophie’s bullying. The theme of friendship holds stronger than the theme of bullying because the story focuses on Cove’s development into a more self-assured person. One instance of her development is when she wins a “stuffed scarecrow contest” and makes the scarecrow in the art room. As she looks at the finished product, Cove says to herself, “The letters are wobbly and Anna would never approve of the stitches—they’re way too uneven—but the message is clear. Anyone who wants to sit next to [her] scarecrow is more than welcome.”

Unlike many stories, Out of Place deemphasizes the bully’s mean behavior. Cove becomes invested in her passions, not as an escape, but to figure out her place in her hometown. Through the story, readers will come to a better understanding of a subtle approach to standing up against bullies, all while being one’s true self. Out of Place does end with a hopeful happily-ever-after, but perhaps most importantly, the story shows how friends — old and new – can make a difference in a person’s life.

“I am the sky and this traffic is the rain. Remember that, Cove. You are the sky. Whatever is happening is just the weather. It will pass,” Cove’s mother.  –Out of Place