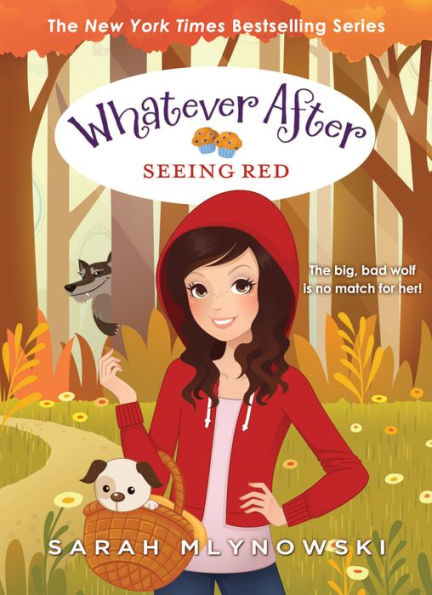 “I love all animals, really. They’re so much easier to understand than people,” Little Red Riding Hood. — Seeing Red

Abby wants to go to her friend’s sleepover party. When she asks the secret mirror in her basement to take her to the party, Abby ends up in a fairy tale—Little Red Riding Hood.

Abby and her brother want to warn Little Red Riding Hood about the big bad wolf, but when they get to Little Red’s grandmother’s house, they are met with a big surprise. How will they be able to avoid becoming a wolf snack?

The introduction of the wolf, Owen, is a delightful surprise. Instead of being a typical villain, Owen becomes a wolf that a person can understand and sympathize with. Owen is “hungry and cold, and my family is mean to me, and the horrible hunter has been chasing me for years.” Owen’s sister and two brothers are important parts of the action. The theme of standing up for family is integrated throughout the story. In the end, Abby realizes “I’m lucky to have been born into such an amazing family—and Owen is lucky to have made his own.”

The woman (and girls) in the story are portrayed as caring, capable people. Mona, who helps save the day, is a policewoman, a firewoman, and a doctor. Although she appears for only a short time, the reader will come away feeling as if girls can do anything.

Although Seeing Red is part of the Whatever After series, the story can be enjoyed without reading the previous books. Seeing Red uses short sentences, dialogue, and onomatopoeias to create an easy-to-read, fast-paced story that will engage readers. The story contains many unique twists compared to the original story, which adds interest. The characters are never stale, but have interesting personalities that come to life. The story contains humor, heart, and teaches about the importance of standing up for yourself, as well as your family.

“I love all animals, really. They’re so much easier to understand than people,” Little Red Riding Hood. — Seeing Red