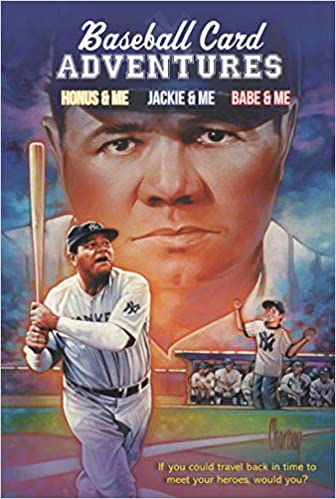 “Your dad is a good man. Nobody’s perfect, but he’s got a lot of good in him. I figure we should find the good in a person and try to get past the bad. Learn from the good. You don’t have to copy everything about a person. Just the good things,” Babe Ruth. –Babe & Me

Babe & Me: A Baseball Card Adventure

On October 1, 1932, during Game Three of the Chicago Cubs–New York Yankees World Series, Babe Ruth belted a long home run to straightaway centerfield. According to legend, just before he hit, Babe pointed to the bleachers and boldly predicted he would slam the next pitch there.

Did he call the shot or didn’t he? Witnesses never agreed. Like other baseball fans, twelve-year-old Joe Stoshack wants to know the truth. But unlike other fans, Joe has the astonishing ability to travel through time using baseball cards—and now he’s determined to settle one of baseball’s greatest puzzles.

Babe & Me explores the father-son relationship through both Babe Ruth’s eyes and Joe’s eyes. Even though Joe’s father has spent little time with him, Babe Ruth points out the good aspects of Joe’s dad. Despite this, Joe struggles with feelings of resentment because his father seems more concerned with coming up with get-rich-quick schemes than spending time with him. His father, who is often angry, blames his troubles on luck. He says, “You can try as hard as you want. Be as good as you can be. But a lot of what happens in the world is plain dumb luck.” Towards the end of the book, Joe’s dad finally realizes that his relationship with Joe is more important than money.

Throughout the story, both Babe Ruth’s public persona and his private, more serious side are shown. Babe Ruth is loud, reckless, and a big spender when around people. However, when he is alone with Joe and his father, Babe Ruth has a tortured soul because of his upbringing as well as his belief that he was not a good father. Historical pictures and partial news articles are scattered throughout the story. Plus, the author explains what events actually happened and which events he made up. In addition, there are four pages of quotes from baseball players that show that even now, people do not agree on whether or not Babe Ruth called his shot.

Joe is a likable main character, who has conflicting emotions about his father. Because Joe and his father were able to spend time with Babe Ruth, they witnessed Babe Ruth’s generosity, his reckless behavior, and his emotional turmoil. However, Joe’s father is not necessarily a likable man and his change of attitude is not believable. Despite this, the fast-paced time travel adventure will appeal to sport-loving readers even though the story has little baseball action. Readers who want to learn more about Babe Ruth should also read Babe Ruth and the Baseball Curse by David A. Kelly. Middle-grade baseball fans can also jump back into time by reading The Brooklyn Nine by Alan Gratz.

“Your dad is a good man. Nobody’s perfect, but he’s got a lot of good in him. I figure we should find the good in a person and try to get past the bad. Learn from the good. You don’t have to copy everything about a person. Just the good things,” Babe Ruth. –Babe & Me