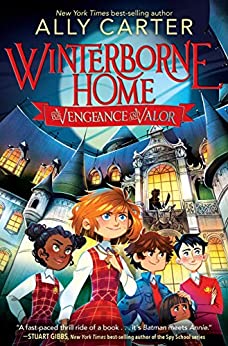 “April didn’t want to admit it, but if a guy is willing to climb a cliff and move a body, you kind of owe him the truth.” Winterborne Home for Vengeance and Valor

Winterborne Home for Vengeance and Valor #1

For as long as April could remember, the key has hung around her neck. As an orphan, she has no one to ask what the key belongs to, but she knows it can help her find her mother. While at a museum, April sees the Winterborne family crest and is surprised that it is the same crest that is on her key. Later that night, she sneaks into the museum and accidently starts a fire. When she awakes, she’s in the hospital and a strange woman is sitting by her bed.

The woman takes April to live in a big, creepy mansion with other orphans. April is convinced that she isn’t like the other orphans because her mother will come back for her. But now, April is convinced that the clues to finding her mother are inside the mansion. As she looks for clues, April realizes that the Winterborne House is hiding more than one secret. April and her friends are going to have to work together to unravel the riddle of a missing heir, a creepy legend, and a mysterious key before the only home they’ve ever known is lost to them forever.

Even though danger lurks behind every corner, April is determined to figure out why Gabriel Winterborne (the missing heir) has suddenly returned to the mansion, and why he is hiding from everyone he knows. April’s determination and grit are admirable, but she has a tendency to get into trouble. April doesn’t know who she can trust, which adds to the story’s suspense. Even though the other orphans eventually help April, they are not well-developed. However, each member of the group is interesting and unique.

Winterborne Home for Vengeance and Valor will appeal to both mystery and action fans. The fast pace, constant danger, and interesting characters will have readers trying to fit all of the pieces into the puzzle. The plot isn’t unique—the creepy mansion, the bitter uncle, and April’s key are all predictable.  In addition, the conclusion leaves a list of unanswered questions. Although the story sets the scene for a sequel, the conclusion is frustrating because none of the main plot points are solved.

Readers who love the Gallagher Girl Series may be disappointed by Winterborne Home for Vengeance and Valor because it lacks a unique plot and humor. Despite this, Winterborne Home for Vengeance and Valor’s mystery and suspense will appeal to a wide range of readers. The easy-to-read story has plenty of intense action, questionable characters, and spooky scenes that will have readers reading late into the night.

“April didn’t want to admit it, but if a guy is willing to climb a cliff and move a body, you kind of owe him the truth.” Winterborne Home for Vengeance and Valor