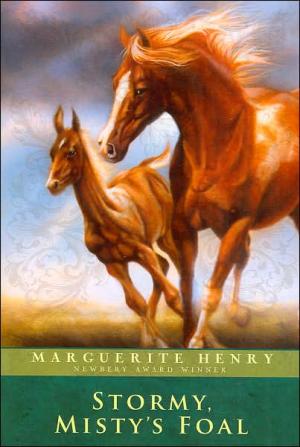 “So let the wind screech, and let the rain slap down, and let the tide rip. We’re all here together under our snug little roof,” Grandpa. –Stormy, Misty’s Foal

A raging storm slashes across Assateague and the Chincoteague islands. Water is everywhere! The wild ponies and the people must battle for their lives.

In the midst of the storm, Misty—the famous mare of Chincoteague—is about to give birth. Paul and Maureen are frantic with worry as the storm rages on…will Misty and her colt survive? This is the story of the hurricane that destroyed the wild herds of Assateague, and how strength and love helped rebuild them.

Readers looking for a good horse story will be disappointed in Stormy, Misty’s Foal. Throughout the story, people talk about Misty and worry about Misty, but Misty appears for only a brief time. Stormy, Misty’s Foal is similar to a survival story because it focuses on Paul’s and Maureen’s experiences with the hurricane. While the story has some tense moments, the realistic story has little action and readers may quickly become bored.

Paul and Maureen are both hard-working children who rarely complain. Throughout the hurricane, the community comes together to help those in need. While the main characters have positive attributes, none of the supporting characters are memorable. In addition, readers may have a difficult time understanding the colloquial language spoken by many of the characters. For example, Grandma says, “This ain’t easy, but I got eenamost enough to make a nice pot of cocoa.”

Readers looking for a story of action and adventure will be disappointed by Stormy, Misty’s Foal. The focus on Misty will become tedious especially for those who did not read Misty of Chincoteague. Even though Paul and Maureen have many positive attributes, their story is not unique or engaging. Readers who want a story that focuses more on horses should skip Stormy, Misty’s Foal.

“So let the wind screech, and let the rain slap down, and let the tide rip. We’re all here together under our snug little roof,” Grandpa. –Stormy, Misty’s Foal