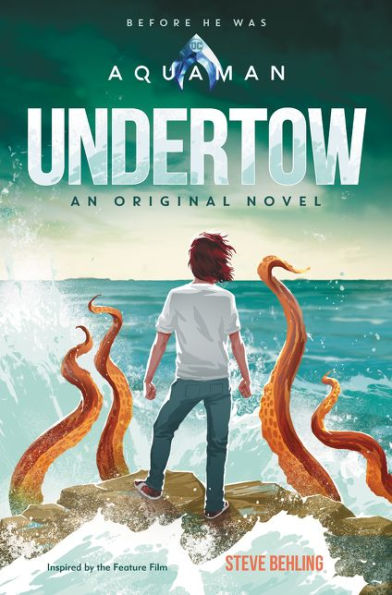 “I am telling my problems to an octopus,” Arthur. —Undertow

Thirteen-year-old Arthur Curry wonders why his mother left when he was only three years old. He wonders why he doesn’t fit in with the other students at school. Arthur doesn’t like when other students call him freak or fish boy. When Claudia befriends him, Arthur wonders if she’ll decide he’s too weird to be her friend.

Arthur wants to learn about his mother. He also wants to figure out why he seems more comfortable talking to an octopus than kids his own age. When a huge storm strikes Amnesty Bay, Arthur discovers that he has the ability to help others. But should he help the boys who have bullied him for years?

Younger readers will enjoy Aquaman: Undertow because it shows that even superheroes can often be misunderstood. The short chapters and easy vocabulary make the book feasible for reluctant readers. The story does not follow the movie, which might disappoint some readers. The bullying conflict comes to a satisfying end that highlights the importance of helping others, no matter who they are or what they’ve done.

Aquaman: Undertow gives a unique insight into Arthur’s early teenage life. Although the plot is not well developed, readers will be able to relate to Arthur as he struggles with being bullied. The story has rough transitions, and some of the scenes end abruptly. The story jumps from Arthur’s current life to his nightmares, and then to Arthur’s father telling stories about the past. Despite the choppy transitions between scenes, readers will enjoy getting to know the boy who becomes Aquaman.

“I am telling my problems to an octopus,” Arthur. —Undertow