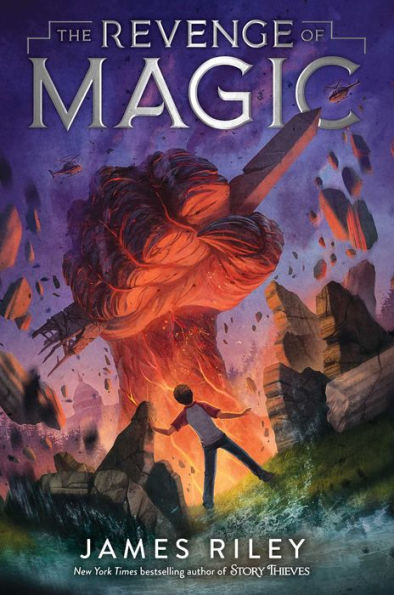 “Life is less about what happens and more about how you deal with those events. . . And look at you, learning magic, you’re only seeing the obstacles, but lots of people, including most of the adults here, would kill for the chance to cast even one spell,” Cyrus. –The Revenge of Magic

The Revenge of Magic #1

Thirteen years ago, books of magic were discovered in various sites around the world alongside the bones of dragons. Children born after this so-called “Discovery Day” have the power to use magic.

Fort Fitzgerald has no idea books of magic exist. Then, while on vacation with his father, a giant creature bursts through the earth, attacking Washington DC. The creature grabs Fort’s father, taking him underground. Fort is devastated and dreams of getting revenge. Six months later, a man named Dr. Opps invites Fort to a government-run school to learn magic.

Life at the school is difficult and Fort has no idea who to trust. Everyone is keeping secrets. What does Jia, Fort’s tutor, know about the attacks? Why does Rachel, master of destructive magic, think Fort is out to destroy the school? And why is Fort reliving memories of an expelled girl every time he goes to sleep? Fort must find the answers or more attacks will come–and this time nothing will stop the creatures.

The Revenge of Magic starts with action and adventure that continues to the very end. Many of the supporting characters are stereotypical, including trope roles such as: the bullies, the tough girl, and the closed-mouthed military commander. However, Fort and Cyrus, a clairvoyant, are well-developed and Cyrus’s matter-of-fact tone adds some much-needed humor to the story. Although Fort’s reason for hating the creatures that took his father is understandable, Fort’s focus on revenge may make it difficult for readers to connect with him.

Fort learns more about the attack on Washington DC through a series of memories that are shared with him. Even though the memories appear in a different font, some readers may have a difficult time keeping the past and the present separated. Several times the creatures are able to control humans, and one creature takes over a student’s body, transforming the human body into the alien’s form. In the end, the creatures reveal their desire to return to earth and enslave humans. The large cast of characters, the complicated plot, and several scary scenes make The Revenge of Magic best suited for stronger readers.

The Revenge of Magic is a strong start to a new series. Even though several mysteries are revealed, the ending leaves unanswered questions that will have readers looking for book two, The Last Dragon. Readers who enjoy high-action adventure stories should also try the Simon Thorn Series by Aimée Carter and the Snared Series by Adam Jay Epstein.

“Life is less about what happens and more about how you deal with those events. . . And look at you, learning magic, you’re only seeing the obstacles, but lots of people, including most of the adults here, would kill for the chance to cast even one spell,” Cyrus. –The Revenge of Magic