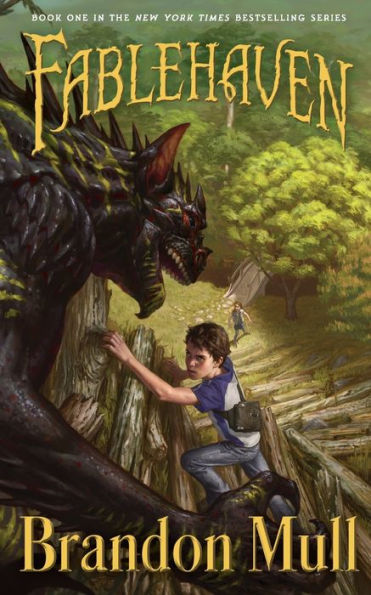 “A refuge for mystical creatures, a stewardship passed down from caretaker to caretaker over the years,” Grandpa Sorenson. –Fablehaven

Siblings Kendra and Seth spend the summer visiting their grandparents. The first week of their visit is confined by their grandfather’s strict rules to stay in the yard and not explore the property. Then Kendra uncovers a secret journal with a single note in it, “Drink the milk.”

Kendra and Seth drink the milk the caretaker leaves out every morning for the butterflies, and suddenly their eyes are opened. The insects surrounding them transform into beautiful fairies and they learn the property, called Fablehaven, is a home for magical, mystical creatures. The siblings are not allowed to explore the property beyond the yard because it is full of dangerous beings. Then, on Midsummer’s Eve, the yard and home’s protections are lifted, and all creatures are allowed to roam free. The terror of the evening leads to a dangerous adventure that will require courage from the young siblings in order to save their family.

Fablehaven highlights the importance of courage, following rules, and loyalty. Seth and Kendra struggle with following rules they feel are unfair, even though the rules are in place to protect them. In the end, the siblings must surmount their fears and face a terrifying situation to overcome evil forces and save their family. The magical fights and demons in the book may be disturbing for some readers, but the scenes are brief and general in their description. However, some readers might find several of the scenes upsetting. For example, during the story, the children see their grandmother naked. Plus, she teaches them how to give a troll a massage, which sends him into a state of ecstasy.

Middle school readers will find they are able to relate to the siblings. Seth is a lovable, mischievous brother whose curiosity tends to get him into trouble. Kendra is more cautious and is frequently led out of her comfort zone by Seth. This novel is entertaining and largely plot-driven, following Seth and Kendra as they mature with their increasing responsibilities and knowledge.

Mull’s story has a slow start but the adventures that follow are worth the wait. The story’s interesting characters include witches, fairies, satyrs, imps, a troll, and a strange chicken. Despite the fantastical characters, Fablehaven’s world needs more descriptions. Still, the novel will leave the reader excited to pick up the next book in the series, Rise of the Evening Star. Readers who want a less upsetting and greatly suspenseful story that takes you into the fairy world, should read The Spiderwick Chronicles by Tony DiTerlizzi & Holly Black.

“A refuge for mystical creatures, a stewardship passed down from caretaker to caretaker over the years,” Grandpa Sorenson. –Fablehaven