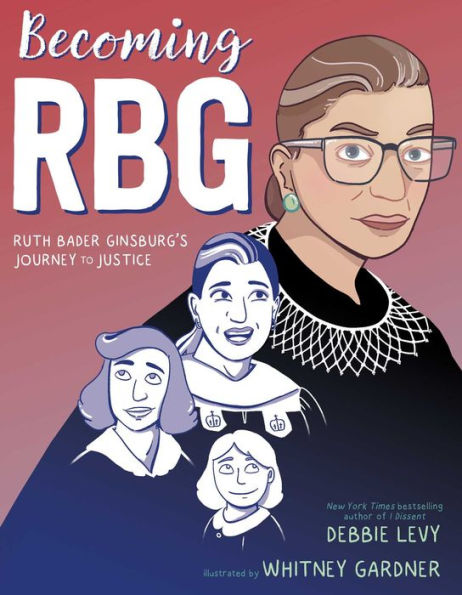 “Even with our enemies, I hope we shall always remember that cruelty is a double-edged sword, destroying not only the victim but the person who indulges in it,” First Lady Eleanor Roosevelt.  –Becoming RBG

Supreme Court Justice Ruth Bader Ginsburg is a modern feminist icon—a leader in the fight for equal treatment of girls and women in society and the workplace. She blazed trails to the peaks of the male-centric worlds of education and law, where women had rarely risen before.

Ruth Bader Ginsburg has often said that true and lasting change in society and law is accomplished slowly, one step at a time. This is how she has evolved, too. Step by step, the shy little girl became a child who questioned unfairness, who became a student who persisted despite obstacles, who became an advocate who resisted injustice, who became a judge who revered the rule of law, who became RBG.

Growing up during World War II and living during the McCarthy era made a huge impact on Ruth. Because she witnessed discrimination, she was determined to help others. However, Ruth’s main focus was helping those who faced gender discrimination. While most of her cases focused on “girls who were held back by unequal treatment,” she also defended men who received unfair treatment because of their gender. Ruth’s goal was “identifying and removing the barriers that restricted what women could do, and that also restricted what men could do.” Ruth knew that as a judge she must listen to others and engage with opposing ideas in order to overcome discrimination.

As a woman, Ruth had to face many obstacles. While society thought that a girl’s greatest goal was to “find a husband who could take care of his wife and family,” Ruth’s mother encouraged her to be independent. Ruth’s mother wanted Ruth to chase her dreams as well as act like a lady. Her mother said, “A lady reacts calmly to upsetting things and without anger. A lady has nothing to do with jealousy.” Throughout her life, Ruth often based her behavior on her mother’s advice.

Eleanor Roosevelt was another positive influence in Ruth’s life. Eleanor Roosevelt spoke against intolerance and cruelty. She said, “Don’t be prejudiced. Be open to refugees who come to our country. Don’t be cruel, even to enemies.” Ruth’s story includes many examples of how both Ruth’s mother and Eleanor Roosevelt affected Ruth’s behavior in a positive manner.

Readers who aren’t interested in the law may find Becoming RGB’s focus on the legal cases that Ruth fought overwhelmingly. The graphic novel has different shaped text boxes which often make it difficult for readers to know which order the text should be read in. However, the text includes explanations of terms that readers may not be familiar with. Even though Becoming RGB is a graphic novel, some of the pages are text-heavy and have advanced vocabulary.

Readers will enjoy the graphic novel’s illustrations that are white with shades of blue. Some pages have pops of red that highlight important aspects of the story. Each short chapter has a title that helps readers know the topic of the chapter. Even though some parts of the biography are dominated by legal cases, Becoming RBG is worth reading. Ruth’s story of perseverance is packed full of life lessons and shows how one woman helped change the world for the better.

“Even with our enemies, I hope we shall always remember that cruelty is a double-edged sword, destroying not only the victim but the person who indulges in it,” First Lady Eleanor Roosevelt.  –Becoming RBG