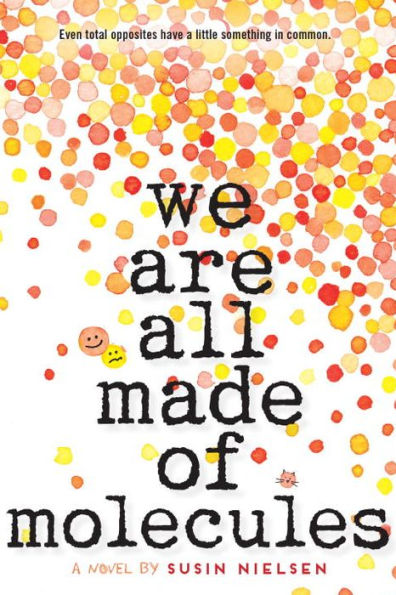 We Are All Made Of Molecules

Stewart always wanted a sister. However, he never imagined that it would take his mother’s death, and his father moving in with his girlfriend before he got his wish. Plus Ashley isn’t anything close to being the sister of his dreams. She’s one year older than Stewart, and they have nothing in common.

Ashley is a typical mean girl whose only concern is staying at the top of the social ladder. So when her father announces that he is moving out because he is gay, Ashley fears that if any of her friends find out about her father’s gayness, it will ruin her social standing. Then when her mother’s boyfriend and son move in, Ashley’s anger ramps up even more. After all, Stewart is a total nerd.

We are all made of molecules is told from the points of view of Stewart and Ashley, who are both loveable in their own way. Stewart is a logical nerd who just wants to fit in. Ashley is a self-centered, angry teen who is trying to deal with the upheaval in her life. Having the story told by both Stewart and Ashley gives the book an interesting twist, because not only can the reader see each character’s thoughts and feelings, but the reader also sees how the two view each other.

Through Ashely’s experiences, the reader learns about the danger of drinking as well as the sexual dangers girls may face. In the end, Ashley realizes that outward appearances are not as important as she thought, and that nerdy Stewart may just know a thing or two about friendship.

We are all made of molecules is an easy-to-read, fun story that explores the messy relationships of parents. Ashley’s father reveals that he is gay, and his gay boyfriend appears. Ashley’s mother has her boyfriend and son move in. In the story, the group of five is shown becoming a unique family unit.