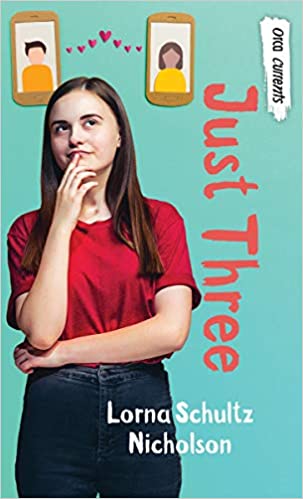 Jillian is a teenage girl still reeling from the loss of her mother. But before her death, Jillian’s mom hired a woman named Rebecca to help out around the house. Two years later, Rebecca is still there, seemingly serving as a replacement for Jillian’s mother. When Jillian catches a romance beginning to blossom between her father and Rebecca, she panics and decides to set her dad up on a dating website. Her father is skeptical, but for Jillian’s sake, he agrees to go on three dates. Just three.

Chaos ensues. The first date ends in a chicken attack. On the second date, Jillian’s dad goes out with a pro biker and gets left in the dust. During the third date, Jillian and her brother spy on their dad’s picnic from the bushes and watch as it devolves into the woman yelling at him for cheating at chess. After witnessing the disastrous third date, Jillian realizes that Rebecca makes her father happy and that his happiness is what is truly important.

One of the main flaws of Just Three is that Jillian is not well-developed. Her primary character trait seems to be a strong dislike of Rebecca, who, in addition to being a blameless victim, is incredibly likable and described as having “this way of making everyone smile.” Jillian’s hatred for Rebecca is ostensibly balanced out by her love for her father, but she spends much of the novel attempting to sabotage his budding relationship. For these reasons, readers may find Jillian to be a somewhat unlikable character.

Just Three is told in first-person narration and alternates between Jillian’s matchmaking hijinks and her conversations with friends at camp. Like Jillian’s character, this second aspect of the story is not especially developed. The camp that Jillian attends is left unnamed and unexplained, and there is no clear arc within these conversations. The author hints at a romantic subplot between Jillian and a “nerdy” boy named Victor who she has a crush on, but this is not resolved in any meaningful way.

Meanwhile, Jillian’s matchmaking character arc is resolved suddenly in a single scene toward the end of the book. After the hostile third date, Jillian sees her dad with Rebecca and observes, “For some reason, [Rebecca] didn’t bug me so much this time. She was always so good-natured. I couldn’t imagine her ever screaming at my dad.” Given Jillian’s stalwart opposition to Rebecca up to this point, readers may find this emotional pivot to be rushed and unbelievable.

Despite the lack of character development, there are bright spots in Just Three. A key theme is learning to prioritize the needs of loved ones, even when it is difficult. While there is not an in-depth exploration of grief, children who have lost a parent or whose parents are dating other people may find Jillian’s actions relatable.

Released by Orca Current books, whose titles are written specifically for teens, Just Three ramps up quickly, but it’s a mixed bag. The easy-to-read story includes plenty of wacky scenes, which readers may find humorous. The book presents a surface-level exploration of grief and moving on. However, flat characters and a formulaic storyline detract from the quality of this premise. If you’re looking for a high-interest book written specifically for reluctant readers that explores family conflicts, you may want to start with In Plain Sight by Laura Langston.