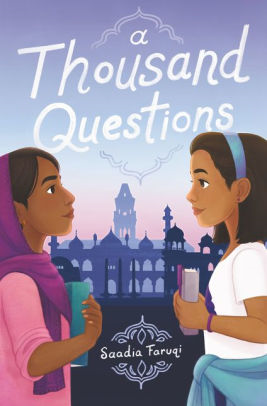 Other books by Saadia Faruqi

“There’s no point in crying over the loss of something. I’ve usually found that things aren’t ever lost. One just doesn’t know where they are at that moment,” Nani. — A Thousand Questions

Mimi has a lot of questions, like why is her mother taking her to Pakistan to meet her grandparents? Why did her father leave Mimi and her mom? Where is Mimi’s dad now? Visiting Mimi’s grandparents in Pakistan might not answer all her questions, but she’s determined to figure some of them out.

Sakina wants nothing more than to attend school. Unfortunately, she has to help her father clean Mimi’s grandparents’ lavish house to make ends meet, so going to school for Sakina feels like a pipe dream. Plus she must pass the English language exam to even attend, and Sakina has no one to practice with. That is, until Mimi and her mother arrive from America.

In a meeting of cultures, Mimi and Sakina learn much from each other and eventually become friends. The family and class dynamics surrounding their lives present new ways of looking at the world and their places within it.

Split between Mimi and Sakina’s perspectives, A Thousand Questions tackles topics like class struggles, family relations, and cultural barriers. Mimi is from Houston, and although she and her mother don’t have a lot in the States, Mimi’s grandparents are wealthy in the Pakistani city of Karachi. Sakina is employed, along with her father (Abba), as a servant in Mimi’s grandparents’ household. The friendship between Mimi and Sakina isn’t encouraged at first, and often the differences in class come up when Mimi has more freedom (both financially and socially) than Sakina. Instead of fostering dislike between the two, Sakina is motivated to improve her English and attend school however she can.

Language is a large part of the book. Many of the characters speak Urdu, and Urdu and Arabic words are used throughout. Faruqi does an excellent job of giving contextual clues, so the language-hopping never feels confusing. A glossary is also included at the end of the book to help aid readers. Language is also used as a plot point. Mimi’s Urdu isn’t great, and Sakina’s English is ok, so the two teach each other. In this exchange of languages, there is also an exchange in cultures. The bond that Sakina and Mimi form is heartwarming, even if they don’t always see eye to eye.

Mimi also has a journal where she writes questions to her father. She misses him, and her letters are part of the narrative. Much of the book details her emotional journey as she learns about her parents’ lives and why her father left. At the end of the book, Mimi is able to reach a resolution and seems to make peace with her father’s leaving.

A Thousand Questions tackles important topics regarding culture, friendship, and family, and both Mimi and Sakina grow as people as they learn about each other. This book will appeal to people who are already familiar with Pakistan as well as to people who want to read about a strong friendship and culturally nuanced book. In A Thousand Questions, Mimi and Sakina’s friendship opens their eyes to the world around them, and it will certainly do the same for the reader. This book is a must-read for its diverse content and its ability to tell a moving story about friendship and family.

Other books by Saadia Faruqi

“There’s no point in crying over the loss of something. I’ve usually found that things aren’t ever lost. One just doesn’t know where they are at that moment,” Nani. — A Thousand Questions