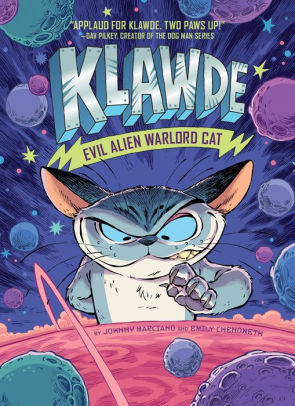 “I also learned something else, something truly bizarre: The young ogre ‘loved’ me. This ‘love’ was an entirely un-feline concept. Was it an emotion, like pride or aggression, or a type of illness?” Klawde. –Klawde: Evil Alien Warlord Cat

Klawde is not your average cat. He’s an emperor from another planet, exiled to Earth. He’s cruel. He’s cunning. He’s brilliant… and he’s about to become Raj Banerjee’s best friend. Whether he likes it or not.

Klawde had everything. Sharp claws. Fine fur. And, being the High Commander of the planet Lyttyrboks, an entire world of warlike cats at his command. But when he is stripped of his feline throne, he is sentenced to the worst possible punishment: exile to a small planet in a quiet corner of the universe… named Earth.

Raj had everything. A cool apartment in Brooklyn. Three friends who lived in his building. And pizza and comics within walking distance. But when his mom gets a job in Elba, Oregon and he is forced to move, all of that changes. It’s now the beginning of summer, he has no friends, and because of his mother’s urgings, he has joined a nature camp.

It’s only when his doorbell rings and he meets a fur ball of a cat that Raj begins to think maybe his luck is turning around.

Klawde does not like Earth. He doesn’t like humans. He doesn’t even like his human boy Raj. In order to leave Earth and get revenge on his home planet, Klawde has no choice but to reveal his real Identity to Raj. In order to get Raj to help him, Klawde tries to hide his true nature. He is hateful, evil, and continuously plotting and manipulating. On the other hand, Raj is completely ordinary and relatable. He is unhappy about moving and afraid that he will never make friends. Readers get an inside view of both Klawde’s and Raj’s thought processes because each chapter switches between the two characters’ points of view.

Klawde: Evil Alien Warlord Cat is exceptionally engaging, humorous, and fun to read. Readers will appreciate the short paragraphs, the easy vocabulary, and the hilarious blue-and-black illustrations. Not only do the illustrations help the reader imagine the story’s events, but they also highlight Klawde’s various emotions of misery, distaste, and disgust. Readers will fall in love with the evil alien cat, understand Raj’s conflicts, and cringe when Raj’s mother expertly wields her power over the household.

Despite the humorous tone of the story, readers will learn the importance of friendship and working together. Klawde: Evil Alien Warlord Cat mixes realistic human conflicts with an outlandish alien warlord cat to create an action-packed story that readers will love. Readers will be eager to pick up the next book in the series, Enemies.

“I also learned something else, something truly bizarre: The young ogre ‘loved’ me. This ‘love’ was an entirely un-feline concept. Was it an emotion, like pride or aggression, or a type of illness?” Klawde. –Klawde: Evil Alien Warlord Cat