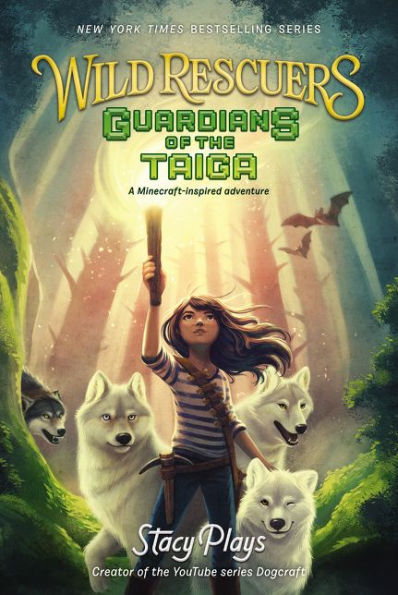 “The wolves are members of our taiga family, same as any other creature. We have to find a way to protect them. . . somehow,” Stacy. –Guardians of the Taiga

Guardians of the Taiga

Stacy doesn’t remember her human family. She has been raised by wolves who taught her how to survive in the wild. Stacy and her wolf family rely on each other for all their needs. The powerful, playful wolves—Addison, Basil, Everest, Noah, Tucker, and Wink—are the only family Stacy has ever needed.

As much as possible, Stacy and her pack avoid humans and try to keep the other forest animals safe. Full of courage, Stacy and the wolves are able to accomplish risky rescue missions. But Stacy soon finds that humans pose a risk to their home. Developers want to change the landscape, destroying the animal’s habitat and forcing them to leave the forest. Powerful businessmen are determined to make their resort a reality. How can Stacy and her pack face the dangers that threaten them?

Stacy takes precarious risks to care for animals in need. From the first page, readers see Stacy jumping into danger and relying on her wolf family to protect her. The Guardians of the Taiga’s non-stop action will have readers eager to turn each page. The story is not only entertaining, but it also teaches about animals, the dangers that humans pose to wildlife, and how developers can encroach on animal’s habitats. The story never feels like a lecture or a textbook, but instead teaches lessons through the characters’ experiences. For example, Stacy talks about an electric company that destroyed the beauty of nature when they “leveled a great swath of the forest for the electrical substation, and then shot at the wild creatures for trespassing on ‘their land.’ And the worst part was they acted entitled—as if the forest belonged to them more than it did to the wolves and the deer and the rabbits and even the bats.”

Even though Stacy is a unique character, readers will relate to her daring attitude, her concern for her wolf family, and her awkwardness around humans. Each wolf has a distinct personality, and although they do not talk, the reader is still able to connect with the animals. Even though Stacy is being raised by wolves, the wolves make sure Stacy has an education. For example, Stacy reads books such as Physics for Dummies, and at one point, Stacy uses physics in order to save a dog’s life. The physics is described in kid-friendly terms.

Readers will love the story because of the non-stop action, the danger, and the unique plot. Parents and teachers will appreciate Guardians of the Taiga because of the educational value. Not only does the story highlight the need to care for nature, but it also helps readers gain new vocabulary skills. The book contains some difficult vocabulary such as pelage, crepuscular, biomes, and satiated; however, many of these words appear in the glossary in the back of the book. Another positive aspect of the story is the black and white pictures that are scattered throughout the book.

The only negative aspect of the story is the abrupt conclusion that leaves many unanswered questions. Instead of wrapping up the story, the author sets up the sequel—Escape to the Mesa. The book ends with a selection of other reading material—an author interview, the inspiration for one of the characters, and an interview with a wolf researcher. Guardians of the Taiga will appeal to a wide range of readers including those who love animals, daring characters, and action. Readers who enjoy this series should add the Simon Thorn series to their list of must-read books.

“The wolves are members of our taiga family, same as any other creature. We have to find a way to protect them. . . somehow,” Stacy. –Guardians of the Taiga