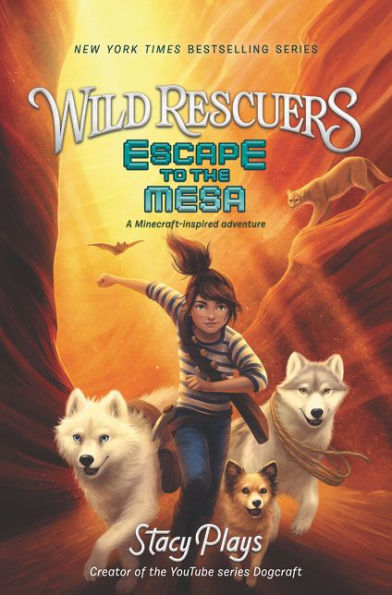 “She had a lot to learn about humans still, but getting to know people like Miriam was worth the effort. Maybe someday Stacy would spend more time in the human world.” –Escape to the Mesa

Escape to the Mesa

Stacy and her wolf family know it’s important to protect each other and the animals of the taiga. After a fire rages through the forest, Stacy and the wolves try to avoid humans at all costs. But when a reporter takes a picture of one of the wolves, animal researchers begin searching for intelligent wolves that raised Stacy. Stacy and her pack know they must leave the forest and escape to a place where no arctic wolf has ever gone before: the desert.

The mesa is unlike anything the wolves have ever seen. With no source of freshwater, the group knows they must find a place to hide. Even though they are in unfamiliar territory, the group still finds animals in need of rescue. When the wolves find themselves in new situations, Stacy discovers that the wolves have hidden abilities. As Stacy tries to help keep her pack safe, she must enter the human world, which makes her wonder—where does she belong?

Stacy is a relatable character who loves her wolf family and the wilderness. Stacy and the wolves learn about the mesa, including what plants are safe to eat as well as some of the dangers that lurk in the desert. Although the plot is similar to the first book, the new setting helps keep the story interesting. Stacy tries to avoid humans, but she has several encounters with people that show them in a positive light.

Like the first book of the series, Escape to the Mesa has non-stop action, danger, and a unique plotline that will keep readers turning pages until the very end. Parents and teachers will appreciate Escape to the Mesa because of the educational value. Not only does the story highlight the need to care for nature, but it also helps readers gain new vocabulary skills. The book contains some difficult vocabulary such as cacophony, cladode, hoodoo, and podzol; however, these words appear in the glossary at the back of the book. Another positive aspect of the story is the black-and-white pictures that are scattered throughout the book.

Escape to the Mesa’s conclusion has a hopeful tone that highlights the importance of preserving nature. Because the story is the second book in the series, readers should read Guardians of the Taiga first because there are several characters and plot points that are introduced in book one. The book ends with a selection of other reading material—the inspiration for one of the characters and an interview with an animal expert.

Escape to the Mesa will appeal to a wide range of readers including those who love animals, daring characters, and action. Readers who enjoy this series should add the Simon Thorn Series to their list of must-read books.

“She had a lot to learn about humans still, but getting to know people like Miriam was worth the effort. Maybe someday Stacy would spend more time in the human world.” –Escape to the Mesa