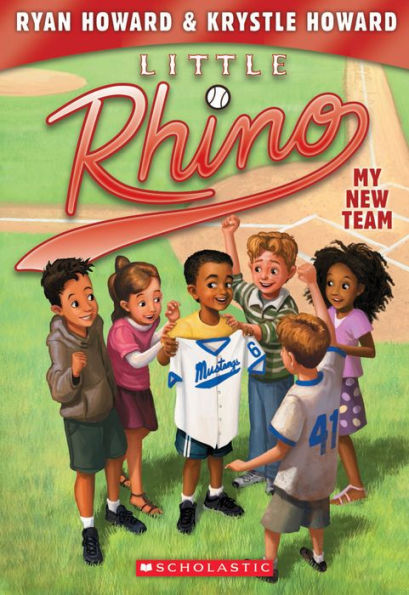 “Sometimes you can turn an enemy into a friend. It isn’t easy, but I’ve done it. Some kids just don’t know how to start,” C.J. –My New Team

Every day when Little Rhino comes home from school, he finishes his homework, grabs his bat and his glove, and runs outside to meet Grandpa James. They always practice catching and hitting in the backyard. Playing baseball with grandfather is Little Rhino’s favorite thing to do, especially when he pretends to be a real Major League home run hitter.

One afternoon, after a long day of second grade, Little Rhino comes home to find out that Grandpa James has signed him up for a baseball league! Little Rhino will finally be a part of a team! But Little Rhino will quickly learn that it is not always so easy to be a good teammate, especially when there’s a bully wearing the same uniform as you.

Even though the characters in My New Team are not well-developed, the story will appeal to younger readers who love sports. The story doesn’t only focus on baseball but also includes a conflict with a bully, as well as the difficulty of being in new situations. Throughout the story, Rhino shows the importance of putting schoolwork before sports as well as the necessity of practice. One positive relationship in Rhino’s life is his grandfather, who plays a prominent role, and has taught Rhino the importance of thinking before he speaks.

My New Team uses realistic situations that younger readers can relate to. When Rhino is faced with a bully, he tries to understand the boy’s actions, and instead of being mean to the bully, Rhino tries to show the boy kindness. Readers who are just transitioning into chapter books may have difficulty reading My New Team because of the text-heavy pages. Although black-and-white pictures appear approximately every three pages, the pictures are similar to those found in a coloring book and do not have much appeal. My New Team uses realistic conflicts to teach important lessons about friendship, perseverance, practice, and the importance of thinking before you act. Readers who enjoy Little Rhino will also want to read the Ball Park Mysteries series.

“Sometimes you can turn an enemy into a friend. It isn’t easy, but I’ve done it. Some kids just don’t know how to start,” C.J. –My New Team