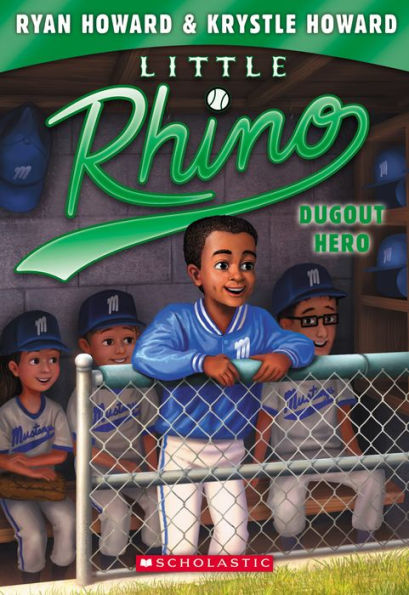 “Your brain is an important piece of sports equipment,” C.J. –Dugout Hero

The score was 5-5 in the bottom of the ninth, with two outs and two strikes. The Mustangs were on a hot winning streak and every victory was important. Little Rhino’s whole team was cheering for him. Even Dylan was standing on the bench rooting for Little Rhino, the home run hitter. It all came down to the next pitch. When the pitcher threw the ball, Little Rhino swung as hard as his arms could handle, felt a pop in his ankle, and dropped to the ground.

That was yesterday. Today, Little Rhino is propped up on the couch with a sprained ankle. The doctor said Little Rhino is not going to be able to play baseball for the next two weeks. Rhino’s friends keep dropping by to bring him his homework, but Rhino just wants to be back on the field. Can he find a way to help his team without playing?

Even though Rhino is anxious to get back onto the field, he knows his injury must heal completely before he can play again. Rhino follows the doctor’s orders even though he misses out on activities he enjoys. Because of Rhino’s injury, the story focuses more on his thought process, which shows how difficult it is for Rhino to be patient while his injury heals. Even though the story has some play-by-play baseball action, Rhino’s lunch group is shown which allows the story to bring in some facts on astronomy.

In the third installment of the Little Rhino series, Rhino continues to grow as a baseball player. Rhino is quick to judge his teammates who are showing unsportsmanlike behavior. However, he does not recognize it in himself. Rhino is often overconfident and criticizes those who do not play as well as him. When Rhino is forced to sit on the sidelines, he does learn that he should be helping the other players in a positive manner.

Rhino’s grandfather continues to play a dominant role in the story; however, by the third book in the series readers will have questions about Rhino’s parents. They never appear in the story, and their absence is never explained. Rhino’s grandfather is a positive role model, who makes sure Rhino and his brother help with chores, follow directions, and work hard.

Fans of the Little Rhino series will enjoy Dugout Hero because of the baseball action and the reappearance of the same characters. Rhino has many good qualities and sets a good example for others. Readers who are just transitioning into chapter books may have difficulty reading My New Team because of the text-heavy pages. Although black-and-white pictures appear approximately every three pages, the pictures are similar to those found in a coloring book and do not have much appeal. Readers who enjoy the Little Rhino series will also want to read the Baseball Blues by Newton A.I.

“Your brain is an important piece of sports equipment,” C.J. –Dugout Hero