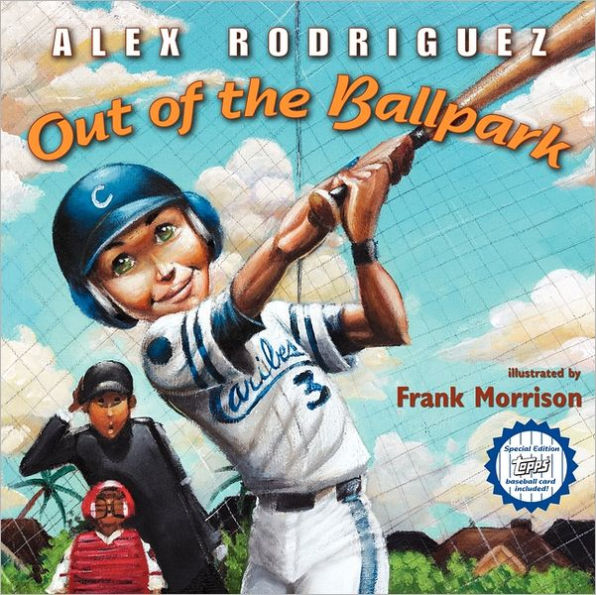 Out of the Ballpark

Before he hit 400 home runs, before he was named American League MVP, before he was ARod to millions of fans, he was Alex. He was just a kid who wanted to play baseball more than anything else in the world.

Baseball superstar Alex Rodriguez has drawn from his own childhood experiences to write Out of the Ballpark. Alex knows what it’s like to swing at a wild pitch or have a ball bounce right between his legs. Alex is determined not to let his mistakes set him back—even if it means getting up at the crack of dawn to work on his hitting and fielding before school starts.

Baseball fans will be drawn to Out of the Ballpark because of the brightly colored cover and Alex Rodriguez’s name. Alex struggles during a game, but during the championship, Alex’s grand slam won the game. Unfortunately, the story is predictable; however, the story does show the importance of hard work, determination, and practice.

The picture book is comprised of bright, cartoon-like pictures that capture the motion of the baseball games. The unique pictures often use two-page spreads to give the baseball field depth and to showcase the celebrating players. Out of the Ballpark is intended to be read aloud to a child, rather than for a child to read it for the first time independently. Each page has 1-6 sentences; however, some of the sentences are complex, which makes the pages text-heavy.

At the end of the story, readers will find a letter from Alex Rodriguez encouraging them to stay away from drugs, work hard, and respect their elders. There are also many pictures of him during his childhood. Even though the story is not memorable, Out of the Ballpark will appeal to baseball fans, and parents can use the story to start a conversation about achieving one’s dreams.