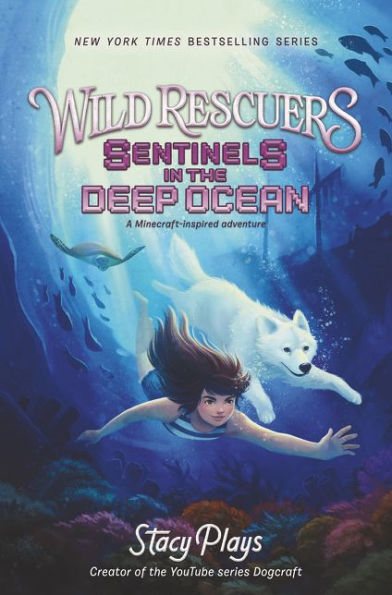 “Stacy was devastated, but a small part of her was also so proud to be the daughter of such an amazing woman. Caring for the wolves—the way she had been for years—was carrying on her parents’ legacy.” –Sentinels in the Deep Ocean

Sentinels in the Deep Ocean

Fresh off their expedition on the tundra, Stacy’s supernatural wolves finally have answers about their origins as well as several newly developing powers. Meanwhile, Stacy has a new cat to care for and a mysterious diary to decode. The secrets buried in its pages will send Stacy and her pack on a thrilling race against time, a race across biomes to the farthest reaches of their world: the deep ocean.

The ocean is brimming with mysteries, but the biggest surprise of all is that Stay’s wolves are not as alone in this world as they thought they were. Could a secret from Stacy’s past hold the key to her future in the taiga?

The fourth installment of the Wild Rescuers Series focuses on Stacy and her pack of wolves. As the story progresses, they journey to a new biome and meet another small pack of magical wolves. Since the story has a large cast of characters, some readers may have difficulty remembering each character. In addition, none of the characters are well developed, which makes it difficult to connect with them.

Like the previous books, Sentinels in the Deep Ocean teaches about biomes. Readers will get a peek at an island with mangrove trees, a dying coral reef, and baby turtles. There is a brief lesson on the dangers of ocean trash as well as the importance of taking care of natural resources. While the new biome is interesting, the story could have included more insight into ocean creatures.

Sentinels in the Deep Ocean adds some interesting supernatural wolves, and it focuses on why the wolves live in different packs. Throughout Stacy’s journey, she spends time translating a journal that was found in the previous book. The journal chronicles where the supernatural wolves came from and explains some of their powers. Plus, the journal adds interest to the story and answers some important questions.

Each chapter begins with an illustration of one of Stacy’s animal friends. Other black and white illustrations are scattered throughout the story. The illustrations will help readers visualize the story’s events. Some readers may struggle with the advanced vocabulary, such as cephalopod, chagrin, and epiphany. However, the end of the book has a helpful glossary, plus an interview with a sea turtle scientist!

Because the plot of each book in the series builds on each other, the Wild Rescuers Series must be read in order. Sentinels in the Deep Ocean uses Stacy’s adventure to teach about the environment. While the story is a little predictable, fans of the story will find enough action, mystery, and supernatural events to keep them entertained. Readers who love action and animals should also read the Survival Tails Series by Katrina Charman.

“Stacy was devastated, but a small part of her was also so proud to be the daughter of such an amazing woman. Caring for the wolves—the way she had been for years—was carrying on her parents’ legacy.” –Sentinels in the Deep Ocean