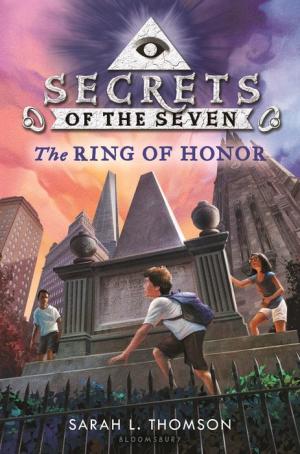 “Sometimes he couldn’t believe how surreal his life had become. Was he actually listening to his friends debate whether to hack into a museum’s security system or attack a couple of armed guards?” Sam. –The Ring of Honor

The Ring of Honor

Secrets of the Seven #3

Middle school geniuses Sam, Martina, and Theo arrive in New York City on a mission. They need to find the third artifact left behind by the Founding Fathers before it falls into the wrong hands. After all, together, these objects unlock a secret weapon designed by Benjamin Franklin. The trio has escaped the forest of Glacier National Park at great cost—Evangeline, their chaperone and friend, was captured by the nefarious and dangerous Gideon Arnold.

Now the three friends must navigate New York City, following clues related to Alexander Hamilton to solve and survive the puzzles and traps they encounter along the way, and uncover the third artifact before Gideon Arnold does. The stakes have never been higher, and Sam, Martina, and Theo might not all make it out alive.

The Ring of Honor takes the reader on another fast-paced and fascinating story that educates readers on Alexander Hamilton, the founder of the United States’ financial system. When the kids meet Hamilton’s descendant, Jack, they are surprised to find an aspiring actor who has no interest in Hamilton’s history. While Jack plays a minor role, his appearance adds humor. While many of the characters reappear—Gideon Arnold, Abby Arnold, and Evangeline—Jack’s appearance gives the story an interesting twist.

While trying to solve Hamilton’s clues, the kids discuss the idea of sacrificing your own well-being for the good of a cause, and they learn facts about how Hamilton died in a duel, and the belief that he developed (shot into the air during the duel). As the kids follow Hamilton’s clues, they must use all their brainpower to analyze historical events and ciphers. Readers will enjoy trying to decipher the clues before they are revealed in the story.

The Ring of Honor is the third and final installment of the Secrets of the Seven Series. While the story of Sam and his friends searching for clues is fast-paced, suspenseful, and entertaining, the conclusion is frustratingly poor because of all the unanswered questions. First, Theo’s mother, who was presumed dead, miraculously reappears under odd circumstances. Evangeline, who is being held captive by Gideon Arnold, fades into the background and is forgotten. Even though Sam and Martina were instrumental in finding three of the founders’ artifacts, Theo’s mother thanks them and sends them home. Plus, Gideon Arnold is still a danger to the kids and to the country. The book’s conclusion negates all of Sam and Martina’s hard work. Instead of leaving the story open-ended, the conclusion leaves the reader wondering why Sam and Martina were dragged into the founder’s problems in the first place.

Secrets of the Seven Series will appeal to readers who love history, puzzles, and ciphers. While readers will thoroughly enjoy the Secrets of the Seven Series, the conclusion is cringe-worthy. Readers who are ready for more advanced and exciting clue-solving mysteries should add the Charlie Thorne Series by Stuart Gibbs and the City Spies Series by James Ponti to their reading list.

“Sometimes he couldn’t believe how surreal his life had become. Was he actually listening to his friends debate whether to hack into a museum’s security system or attack a couple of armed guards?” Sam. –The Ring of Honor