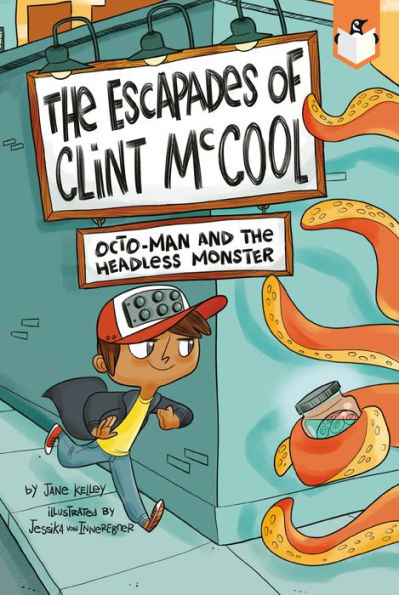 “Clink McCool has defeated a zillion enemies. He can’t be scared of a dress,” Clint McCool. –Octo-Man and the Headless Monster

The Escapades of Clint McCool

Octo-Man and the Headless Monster #1

Walter wants everyone to call him Clint McCool. He’s always thinking of new ideas. Clint McCool tries to stay out of trouble, but some days trouble seems to find him. Clink McCool’s two friends Marco and ML are coming over after school. As they are walking home, Clink McCool and his friends stumble across a sci-fi movie set. Clink McCool is determined to find a way to be the star of the show. With Clink McCool’s six-button hat, which brings him special pretend powers, Clint McCool knows he can help make the Octo-Man’s movie even better. But he ends up ruining some of the movie props and angering his friends. Is there any way Clint McCool can still save the day?

Readers will relate to Clint McCool as he goes on his escapades. Clint McCool always has new ideas. “Zing, zong, zing. Brain Flash!” But other people don’t always appreciate his great ideas. Clint McCool seems to get into trouble even when he’s trying to help. In one afternoon, he upsets his teacher, his mother, his two best friends, and the crew of the Octo-Man movie. As he goes on his adventures, blue and white comic-style illustrations bring the story to life.

Clint McCool has a hard time concentrating and focusing on one idea. A member of the film crew tells Clint McCool that if he doesn’t focus on one idea, “You won’t get anything done. Don’t let your ideas run wild. Be their boss.”

The story also highlights the importance of forgiving each other. Even though readers will find humor in Clint McCool’s outrageous escapades, parents may find his behavior obnoxious. Clint McCool is self-centered, doesn’t listen to anyone, and has a habit of destroying things (film props and his friend’s shirt). Even though he repeatedly sneaks onto the movie set and destroys props, in the end, he is forgiven and given a small role in the movie. The end of the story illustrates how everyone wants people to like them, even when they make a mistake, as well as the importance of apologizing.

Emerging readers who are transitioning to chapter books will enjoy the engaging art as well as the mischief Clint McCool gets into. Even though some pages only have text, the text uses simple sentences with easy vocabulary. Reading the story is fun because of the dialogue, onomatopoeias, and pictures that are scattered throughout the story. Octo-Man and the Headless Monster is an entertaining story with relatable characters that teach positive lessons. However, parents will not want their children to emulate Clint McCool’s behaviors.

“Clink McCool has defeated a zillion enemies. He can’t be scared of a dress,” Clint McCool. –Octo-Man and the Headless Monster