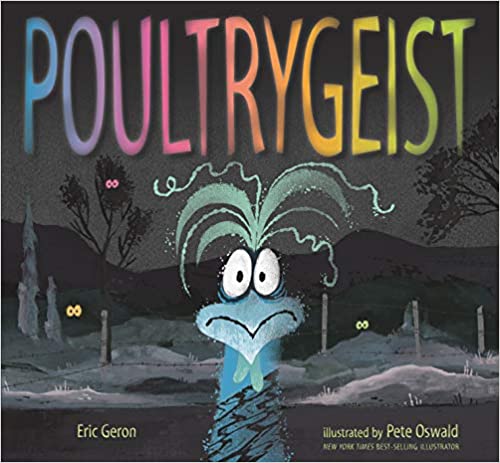 Other books by Eric Geron

“I may be a ghost, but I will not haunt anyone. Nothing you do or say can ever change that,” the chicken. – Poultrygeist

A chicken crosses the road and is promptly run over by a passing truck. When the chicken awakes, it realizes that it is now a floating spirit separate from its flattened body, and that the world around it is suddenly dark. From the darkness, the eyes of other spirits appear. The spirits explain to the confused chicken that while it was crossing the road, it got to what they call “the other side,” a realm where the spirits of animals exist. They tell the chicken that he has become a “poultrygeist.”

Poultrygeist is a fast and funny read with a darkly comedic twist on a familiar joke. The chicken’s violent fate might disturb younger readers, but his experience in the afterlife teaches them a thoughtful lesson about the dangers of peer pressure. Readers will be drawn to the vivid and colorful illustrations of the living realm, while the other side will interest them with a unique art style full of glowing, single-colored characters and muted backgrounds.

The book does not feature any narration and instead uses illustrations and the characters’ dialogue to tell the story. Each character’s speech is distinguished by separate font colors that match the color of their spirit. For example, the font of the chicken’s dialogue is blue, matching the chicken’s blue spirit. Each page contains 1-6 sentences with simple vocabulary. Readers will enjoy the spirits’ habit of speaking in rhyme. Though the spirits’ furious eyes and sharp teeth may frighten younger readers, they can take comfort in the chicken’s unconditional kindness and ability to resist peer pressure. On one page, the chicken even breaks the fourth wall to check in on the reader, asking “Psst…you doing okay?”

Poultrygeist is a particularly great read for readers adjusting to new situations and searching for the right crowd. The story teaches readers to be the version of themselves that they are comfortable being and to not allow the negative influence of others to change them. Poultrygeist readers will be amused by the exaggerations of the spirit world as well as the story’s wordplay.

Other books by Eric Geron

“I may be a ghost, but I will not haunt anyone. Nothing you do or say can ever change that,” the chicken. – Poultrygeist