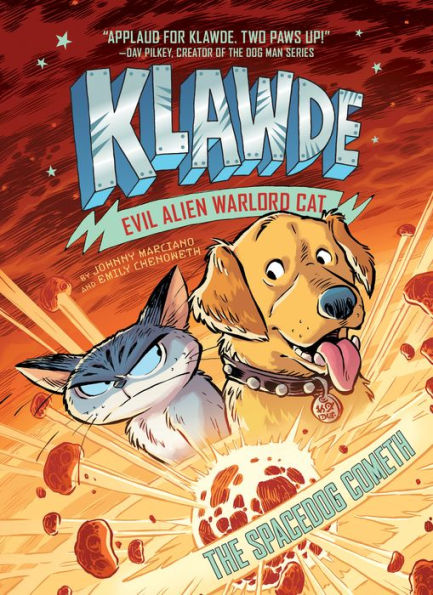 “Have you learned nothing about what it means to be a warlord? Everything is mine,” Klawde. –The Spacedog Cometh

Klawde is not an average cat. He’s an exiled emperor from across the universe. Klawde spends his days plotting his revenge. He will use any means possible to return to his homeland. Klawde is cruel. He’s cunning. He’s also his human’s best friend.

As Klawde plots his cosmic revenge, the space dog Barx arrives on Earth. Barx plans to take Klawde back to his home planet, where Klawde will be punished for his crimes. Unlike Klawde, Barx is loyal and an overall good boy. He also loves to play catch. Barx is determined to bring Klawde to justice. Will the ferocious feline be able to avoid justice?

While Klawde is focused on evading Barx, Raj is faced with his own out-of-town visitor. Although his grandmother is from Earth, she may be even more formidable than Klawde. When Raj’s grandmother plans a birthday party for Raj, he is convinced that the party will lead to the ultimate embarrassment.

As Raj is trying to survive his grandmother’s visit, Klawde is up to no good. He is convinced that torturing Barx is the key to returning to his home planet. The contrast between Klawde and Barx is amusing and leads to many fight-and-chase scenes. As Klawde and Barx create chaos, Raj doesn’t know if Klawde is being honest or not. After all, Klawde has told him, “Lies are the sharpest arrows in the warrior’s quiver” and “The truth is whatever I say it is.”

Klawde: The Spacedog Cometh continues the engaging, comical story of Klawde. The new characters keep the plot fresh and exciting. Although Klawde’s plans don’t turn out as he had hoped, the conclusion is heartwarming and proves that Klawde will never change. The story continues in the same action-packed format as the previous books. The engaging story has short paragraphs, easy vocabulary, and hilarious blue-and-black illustrations. Not only do the illustrations help the reader imagine the story’s events, but they also highlight Klawde’s various emotions of misery, distaste, and disgust.

“Have you learned nothing about what it means to be a warlord? Everything is mine,” Klawde. –The Spacedog Cometh