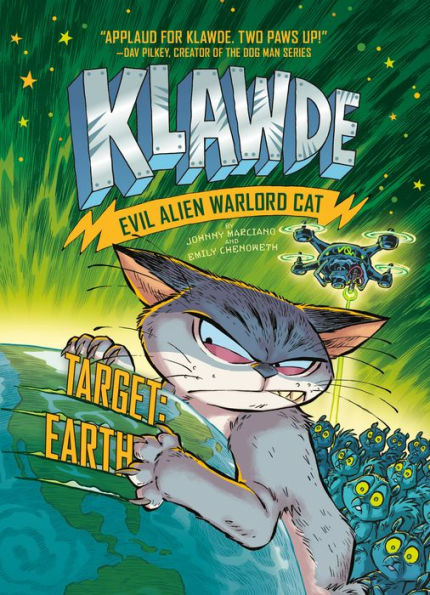 “I was really having trouble taking all this in. My cat—an evil alien entrepreneur! How had he done it? What did it mean? And, most importantly, what could we do with a billion dollars?” –Target: Earth

Klawde is not your average cat. He is an exiled emperor from across the universe with a hunger for battle and a thirst for revenge. He’s cruel. He’s cunning. He’s brilliant. He’s also Raj’s best friend.

With Klawde now stuck on a dismal planet, he sets his sights on a new target to conquer: Earth. But to succeed, he needs two simple things: an army of zombie squirrels, and money. Lots of money.

Raj is simply trying to make some cash for a cool virtual reality headset. But when a neighbor catches wind of Klawde’s nefarious plan, Raj may end up paying for his cat’s schemes.

Even though Klawde is devious and deceitful, he is also very likable. In the fourth installment of the Klawde: Evil Alien Warlord Cat Series, both Klawde and Raj need money, but in true Klawde style, he devises a way to make virtual money. Klawde’s obsessive desire to regain control is hilarious, especially because he always underestimates the hairless ogres of Earth. The power-hungry cat doesn’t understand why humans “were so addicted to consumption. To shopping. To their possessions. Did they not realize that the most important things in life are those you cannot touch or possess, let alone buy? Like power domination. And humiliating your enemies!”

Klawde’s plotting brilliantly connects to Raj, who starts a lawn care business with his two friends. But with Klawde’s newfound millions, Raj has everything his heart desires—a virtual reality game, a skateboard, new shoes, and pizza. Raj thought his new game would make him happy, but in the end, he realizes that “The VQ had totally been messing with my mind.” At one point, Raj spends so much time playing a virtual reality game that he doesn’t sleep, do his homework, or spend time with his friends. In the end, Raj learns that “Money didn’t matter when you already had everything you need. . . family and friends.”

Klawde: Evil Alien Warlord Cat Series is exceptionally engaging, humorous, and fun to read. Readers will appreciate the short paragraphs, the easy vocabulary, and the hilarious blue-and-black illustrations. Not only do the illustrations help the readers imagine the story’s events, they also highlight Klawde’s emotions of misery, distaste, and disgust.

Readers will laugh out loud as Klawde tries to use squirrels to take over Earth. The conclusion introduces a new enemy—Colonel Akornius Maximus, a squirrel bent on keeping his Earthy brothers and sisters safe. Readers will be eager to read the next book in the series, Emperor of the Universe. Fans looking to put more humor into their reading should also check out the Mac B. Kid Spy Series by Mac Barnett.

“I was really having trouble taking all this in. My cat—an evil alien entrepreneur! How had he done it? What did it mean? And, most importantly, what could we do with a billion dollars?” –Target: Earth