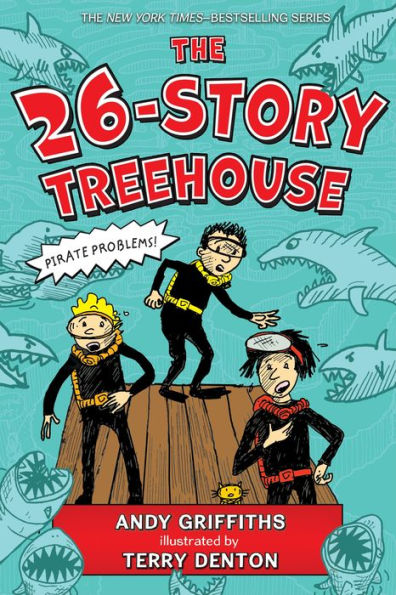 “If you’re like most of our readers, you’re probably wondering how Terry and I met. Well, it’s a long story, but it’s a pretty exciting one and it starts like this. . .” Andy. –The 26-Story Treehouse

Life is never boring in a 13-story treehouse, especially when you add 13 more stories! Andy and Terry have added a bumper car rink, a skate ramp with a crocodile-pit hazard, a mud-fighting arena, an antigravity chamber, an ice-skating pond with real ice-skating penguins, a mechanical bull named Kevin, an Automatic Tattoo Machine, an ice-cream parlor with seventy-eight flavors, and the Maze of Doom–a maze so complicated nobody has escaped. Fun seems endless in their new 26-story treehouse!

Distracted by their new, amazing stories, Andy and Terry do not notice their new book is due Friday until their publisher, Mr. Big Nose, threatens to fire them. While writing their book about how Andy, Terry, and Jill, their animal-friendly neighbor, met, Captain Woodenhead suddenly appears. Threatening to destroy the treehouse and enslave Andy, Terry, and Jill on his ship, the trio must outwit and outsmart the captain and his evil crew before time runs out. Can the boys save their treehouse and fight off the pirates all while writing their new book?

The Treehouse Series is an imaginative series for young readers who are reluctant to read. Griffiths and Denton created a silly story that will have young readers laughing from beginning to end. Along with their crazy slapstick scenarios, Griffiths and Denton teach readers about the importance of friendship. Andy, Terry, and Jill must work together throughout the book to solve their complex problems. Without each other, Andy, Terry, and Jill would never have been able to perform “open shark surgery,” fight off pirates or escape the Maze of Doom. Also, the funny black-and-white illustrations contribute to a positive reading experience and will help younger readers transfer their reading skills from picture books into full-fledged novels.

However, The 26-Story Treehouse may upset some readers. Before his entire crew dies in a terrible shipwreck, Captain Woodenhead’s head is bitten off by a giant sea monster. Later in the book, he is pictured being eaten alive by man-eating sharks.

The 26-Story Treehouse has very simple vocabulary and sentence structure, reading more like a comic book rather than an actual chapter book. In the end, The 26-Story Treehouse is an easy-to-read story that will teach the reader practical lessons about friendship while causing readers to giggle.

“If you’re like most of our readers, you’re probably wondering how Terry and I met. Well, it’s a long story, but it’s a pretty exciting one and it starts like this. . .” Andy. –The 26-Story Treehouse