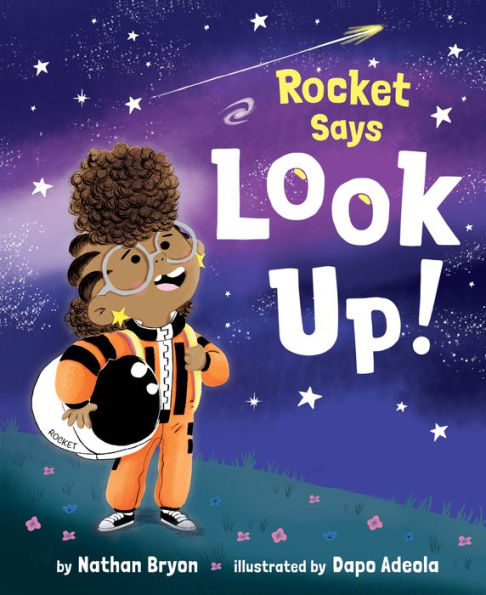 “Mom tells me that I never stop looking up and my head is always floating in the clouds,” Rocket. –Rocket Says Look Up!

Rocket is a stargazer and an aspiring astronaut. She’s excited because a meteor shower will be visible tonight. She makes flyers to invite everyone in the neighborhood to see the meteor shower. Rocket also wants her big brother, Jamal, to see it but he’s always looking at his phone. Rocket’s enthusiasm brings neighbors and family together for a memorable sighting.

Rocket’s enthusiasm for space is catching, and young readers will be excited to enter Rocket’s world. Rocket’s imagination shines through as she makes a ship to the stars out of a box and presents her fliers to her cat and stuffed animals. While all of Rocket’s play is fun, she also is learning to defy gravity (swing) and capture rare and exotic life-forms (a butterfly). Rocket’s love of space is intertwined with her family life and the drama of annoying her older brother. Rocket is a loveable character who will teach readers the importance of having big dreams.

Rocket Says Look Up! is an engaging picture book with bright illustrations that are full of fun details. For example, Rocket’s cat wears a spacesuit that matches Rocket’s. Her brother Jamal often has funny facial expressions, but mostly he stares at his phone until he sees the meteor shower. Seeing Jamal’s face light up adds to the wonder of the meteor shower. When Rocket’s neighbors show up to watch the meteor shower, they are a diverse group of people. The story highlights how one little girl has the ability to bring her neighborhood together.

Even though Rocket Says Look Up! is a picture book, the story is intended to be read aloud to a child, rather than for a child to read it for the first time independently. Most pages contain 1-4 sentences, but some of the sentences are complex. Rocket gives interesting facts about “The Amazing Phoenix Meteor Shower.” These interesting facts appear in quote boxes and begin with, “Did you know. . .”

Rocket, who is African American, looks up to Mae Jemison, the first African American woman in space. Rocket’s enthusiasm will encourage readers to learn more about space and about Mae Jamison. Rocket Says Look Up! blends amazing illustrations with an engaging story that teaches fun facts about space. Space-loving readers who want more factual information about space should add Mae Among The Stars by Roda Ahmed and the Mousetronaut Series by Mark Kelly to their must-read list.

“Mom tells me that I never stop looking up and my head is always floating in the clouds,” Rocket. –Rocket Says Look Up!