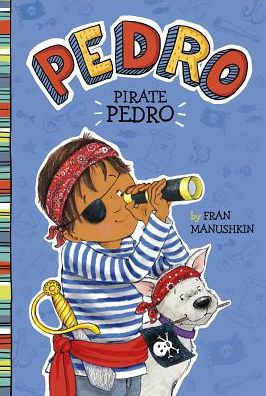 “We would all be jolly captains,” said Pedro. “Maybe we should take turns.”  –Pirate Pedro

It’s Pirate Day at school, and Pedro and his mates have so much fun pretending to be pirates at school, they take the game home. The only problem? They all want to be captain of the ship.

The chapter book Pirate Pedro is written with simple vocabulary that beginning readers will be able to master. Each page contains four or fewer sentences as well as colorful pictures, which include a diverse cast of characters. The story contains fun pirate facts and new pirate words and sayings like “shiver me timbers!”

After the story ends, readers can continue the pirate fun by reading two pages of pirate jokes. The story also has a glossary, questions, and writing prompts. Pirate Pedro engages young readers by using interesting characters who have relatable problems. Pirate Pedro will help independent readers improve their skills and become confident readers. Although Pirate Pedro is part of a series with many of the same characters, it doe not need to be read in order. Readers who enjoy the Pedro series should also try the Katie Woo series because it has many of the same characters and is written in the same format.

“We would all be jolly captains,” said Pedro. “Maybe we should take turns.”  –Pirate Pedro