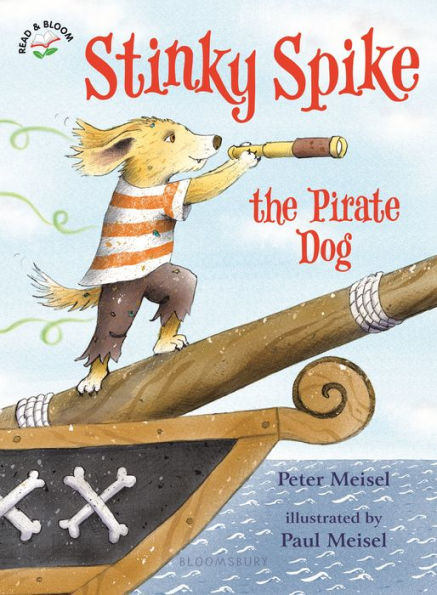 Ahoy! When this shipyard pup gets lost at sea, he’s rescued by a crew of stinky pirates led by Captain Fishbeard. Spike must prove to the captain he can be a real pirate. Luckily, Stinky Spike has the best nose on the seven seas, and he uses it to sniff out all kinds of treasure. But what happens when Spike’s sense of smell leads him to some very strange loot?

Stinky Spike the Pirate Dog is a silly story with alliteration, onomonopia, and dialogue that makes the story fun to read out loud. The story focuses on how Spike became the Pirate Dog and the humorous, unexpected characters he meets along the way. For example, when Spike was lost at sea, he meets two sharks that don’t want to eat him. The sharks just want Spike to go away because “you stink so bad that you’ll scare away our dinner.” Even though much of the humor comes from all the terrible things Spike smells, readers will also enjoy all of the animals and people Spike meets.

The entertaining story has wonderful, brightly colored illustrations that will tickle readers’ silly bones. Even though the story focuses on animals, Spike also meets a small but diverse group of pirates. The large illustrations add comedy to the story by adding little surprises, like the pirate captain with a peg leg, a parrot on his hat, and fish sticking out of his beard. Stinky Spike the Pirate Dog is told in three chapters; each two-page spread has 4 to 7 sentences.

Fans of the Pirate Puppies Series by Erin Soderberg will quickly fall in love with Stinky Spike the Pirate Dog. While the story lacks pirate language, its humor and unexpected surprises will entertain readers. Plus, the story could lead to a fun discussion on what people and pirates consider to be treasure. If you’re looking for a fun story that your little reader will love, Stinky Spike the Pirate Dog has plenty of treasure inside its pages including interesting characters, humor, and detailed illustrations. Readers who want to read more imaginative pirate stories should also read All Paws on Deck by Jessica Young.