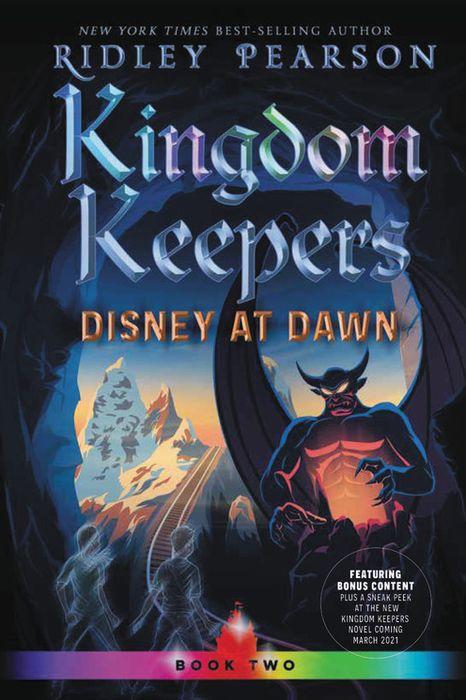 “They weren’t superheroes; they were teen models mixed up in some confused technology that no one fully understood—not even the people who’d invented it.” –Disney at Dawn

The Kingdom Keepers are back together to protect the Disney Parks from the evil fairy, Maleficent, and the Overtakers. But this time, the attack is personal. Amanda’s sister, Jez, has been kidnapped, leaving behind only her journal of clairvoyant sketches to help her friends find her. The search takes the Keepers to Walt Disney World’s Animal Kingdom, where Maleficent is hiding and using mind-controlled animals to do her evil bidding.

Raising the stakes further, Maleficent has set up a second hologram server that only she controls.  If the heroes fall asleep, Maleficent and the Overtakers can force them to “crossover” into their holographic state and be stuck in Sleeping Beauty Syndrome, a coma-like sleep from which you cannot wake up on your own. Finn and the rest of the Kingdom Keepers must go undercover as Animal Kingdom employees to uncover secret meanings in Jez’s clairvoyant drawings, stop Maleficent and the animals from their quest to escape the parks, and find a way to shut down the second server, all before they become unable to stay awake any longer.

This thrilling second installment in the Kingdom Keepers Series keeps readers on their toes with fast-paced action sequences, simultaneous missions, and an exciting new location where the magic of the parks is shown. The book successfully transports readers to Animal Kingdom in the thick of the action. Pearson’s narration once again manages to provide wayfinding tips as well as the necessary descriptions of park attractions, so even those who have never seen Animal Kingdom before will feel as if they are actually there with the Keepers. Pearson also strikes a balance between solo missions for each Kingdom Keeper as well as creating new duos and trios for the action to revolve around. As the teams split off, the characters’ dynamics shine, with each different personality on display for readers to enjoy. They all get the chance to be leaders in their own unique way.

As before, if your young reader enjoys the Disney Parks, or has an interest in the park’s operations, this book offers an exciting “behind the scenes” view from the Kingdom Keepers’ perspective. It balances the presence of technical knowledge of the theme park and its attractions with the fantastical plot that brings animals, animatronics, and evil villains to life. The second book in the series does everything that Disney After Dark does well, but on a bigger scale, with characters that readers now know and are sure to root for.

“They weren’t superheroes; they were teen models mixed up in some confused technology that no one fully understood—not even the people who’d invented it.” –Disney at Dawn