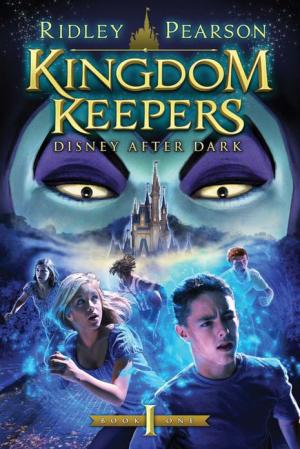 “If you believe in something strongly enough, I think you can make it happen,” said Wayne. –Disney After Dark

Have you ever wondered what happens after Walt Disney World is closed at night, when no one is around, and the characters are all alone? When middle schooler Finn Whitman becomes a Disney Interactive Host, a hologram meant to guide guests through the parks, he finds that the answer is a lot more magical and frightening than he ever thought possible. Every night, Finn and his four fellow hosts “crossover” and become a human-hologram hybrid able to explore the parks. Wayne, the Imagineer responsible for creating the DHI program, reveals the hologram hosts were created to become the parks first line of defense against an army of evil characters called the Overtakers. The evil characters want to use the magic that powers the parks to bring darkness to the world. The five hosts must solve Walt Disney’s Stonecutter’s Quill fable, defeat the Overtakers, and restore peace to the “Most Magical place on Earth.”

The hosts are all middle schoolers with starkly different personalities. At first, each character feels alone and afraid, and they do not want to go on the mission. None of the hosts believe they are equipped to take on Maleficent’s black magic, but in the end their teamwork makes saving the park possible. As the book progresses, they each learn to make sacrifices for each other, utilize their individual strengths, and work together to become a powerful team. The book develops the theme that teamwork is necessary to overcome challenges.

The story emphasizes the value of working as a team and maintaining the power of one’s beliefs. Wayne believes the ability for the characters to come to life is powered by the parkgoers who believe the magic in the parks to be real. Finn later discovers that his own thoughts are powerful enough to transform himself from a physical being into light. Pearson shows that the characters’ thoughts and beliefs can alter reality, making that power a significant theme in the book.

In the earlier stages of the text, the characters are hindered by their simple personalities (pretty, smart, athletic, quiet, leader). However, as they learn to work together, they become more likable. The plot of the story, and the setting, create the true magic of this book. Pearson ensures that every corner of the Magic Kingdom is featured, and he fully explains the details that are necessary to feel as if you are traveling around with the characters. He also incorporates some fascinating park history and operational fun facts which offer insight into the parks.

Disney After Dark includes some facts about the park’s operations and may poke holes in the illusion of magic that the parks create. Fans of the Disney Parks may enjoy reading about the hosts’ quest to solve Walt’s fable throughout the Magic Kingdom and MGM Studios. Pearson does not visit every park in this first book, leaving other areas to explore in later additions to the series. He also makes it clear that while Maleficent is certainly a powerful foe, she is not the only villain the five hosts will have to face. This builds anticipation for the following books, while still creating a satisfying end to this story. Much of the book focuses on the children avoiding harm from the hand of the Overtakers, but the violence is fairly mild, with many of the interactions between the villains and the kids resulting in minimal injuries. The effect on the hosts is fear more than anything else. Pearson creates a well-paced story that is just thrilling enough to draw readers into the adventure, using mystery, action, and creative storytelling to bring Disney magic through the pages of this first installment in the Kingdom Keepers series.

“If you believe in something strongly enough, I think you can make it happen,” said Wayne. –Disney After Dark