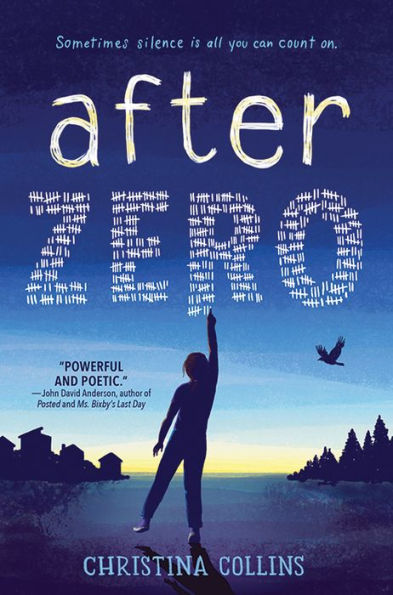 “For me, sitting at a table full of people is torture. A class discussion is torture. Lunch in the cafeteria is torture,” Elise. –After Zero

Elise has spent years hearing her friend Mel talk about her friends at school. When Elise’s mother finally decides that Elise can go to public school, she is excited. But she soon discovers that it’s easy to say the wrong thing. When Elise accidentally spills a secret and makes a social media mistake, she decides it’s better to be quiet. Now, Elise tries to say as few words as possible. She keeps a notebook full of tallies, marking each word she says. Her goal is to get to zero words spoken.

At school, Elise is known as the quiet girl. She has made no friends, and even Mel is drifting away from her. Now, Elise isn’t sure she could talk if she wanted to. But when she learns a shocking family secret, Elise learns that silence may not be the answer for everything.

After Zero is a beautifully written story about Elise’s personal struggle. Readers will relate to Elise’s desire to make friends and her inability to understand social norms. Like many, Elise would like to connect with someone, but she’s so afraid of saying the wrong thing that she is unable to talk. The story focuses on Elise’s thoughts and struggles, which allows the reader to understand Elise’s thought process. Some of the girls become hostile because they misunderstand Elise’s silence. They do not understand that Elise truly believes that, “silence is the means of avoiding misfortune.”

Although Elise is lonely and bullied at school, her family life is even worse. Her mother hardly ever talks to her. When she gets in an argument with her mother, her “mother’s eyes flash. I’ve seen it before. Whether the loathing is for me or my father, or both, I’m not sure.” Elise lives in a silent world, which forces her to spend too much time focusing on her inner thoughts. After Zero explains Elise’s anxiety in a way that is understandable, allowing the reader to feel compassion for her.

The first person narration allows Elise’s personality to jump off the page. The story is the perfect blend of Elise’s internal turmoil and outside conflicts. The easy-to-read story highlights the importance of forgiveness and friendship. Elise’s story is not only enjoyable, but it will also stay with readers for a long time. Anyone who reads After Zero will come away with a new understanding of others’ struggles with anxiety. The story will also show readers the importance of having empathy for their peers.