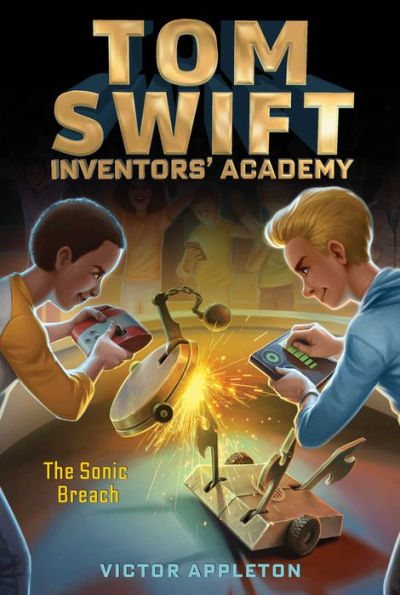 Tom gets to take all sorts of cool classes at the Swift Academy of Science and Technology, but robotics may be the one excites him the most. His teacher is holding a battling robot tournament, and Tom and his friends have to build a machine that will come out on top.

With the final battle coming up, Tom and his friends need as much time as possible to refine their masterpiece. But the rest of their teachers have been giving so many pop quizzes that they can barely focus in class, never mind concentrate on the tournament. Naturally, everyone is frustrated with the trend. . . until a mysterious new phone app appears. If students get pop quizzes during first period, they can warn everyone else about it by getting their phones to emit a high-pitched sound—a mosquito alarm—that adults can’t hear.

Tom is unsure about the whole thing, but it technically isn’t cheating, right? But when someone changes the app to break all the rules, the ethics aren’t debatable anymore. The longer the perpetrator remains unknown, the more harshly teachers treat all the students, and the pressure won’t stop until Tom and his friends track down the person behind the app takeover.

Like the first book in the series, The Sonic Breach incorporates mystery and technology. However, unlike The Drone Pursuit, The Sonic Breach doesn’t have as much interaction between Tom and his friends, which takes some of the enjoyment out of the story. Book two is also told from Tom’s point of view, and the story has an easy-to-read, conversational tone which allows the readers to understand Tom’s thinking process.

As Tom and his friends solve the mystery of who hacked the Pop Chop app, the readers will learn the importance of perseverance and helping others. At one point, Tom thinks, “Mistakes are ways to learn, overcome, and move forward. I would much rather have had our robot fail during a sparring match than during the final battle. This way we can learn from our design mistakes and make it better than it was before.”

The cover of The Sonic Breach shows two students battling their robots. However, the battle bots take backstage to the moral question of using a new app—Pop Chop. The story focuses on Tom’s moral dilemma: is using Pop Chop a form of cheating? Although the topic is relevant to students, readers may quickly become bored with the lack of action. In the end, Tom and his friends discover who hacked the Pop Chop app, but the mystery’s solution is unrealistic and comes too easily.

Readers looking for non-stop action and an in-depth mystery may want to leave The Sonic Breach on the shelf. However, readers who enjoyed the first Tom Swift book and are interested in technology will find The Sonic Breach entertaining. Tom Swift is an intelligent, likable character who models good communication skills. Plus, parents will appreciate the story’s positive relationships and messages.