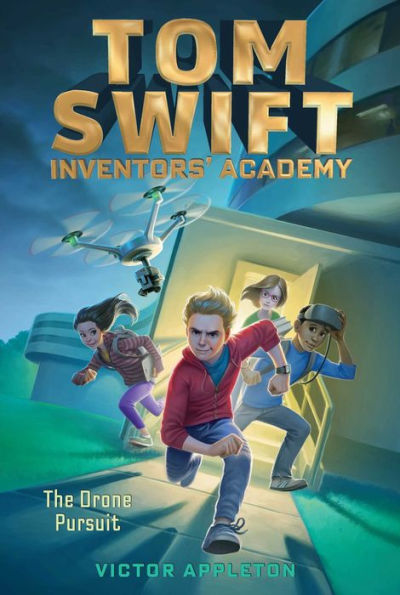 “So I’m a lookout now, hum? Is there no end to my life of crime?” Amy. –The Drone Pursuit

When your dad funds the Swift Academy of Science and Technology, you’re bound to have a bunch of tech at your disposal. So, no one bats an eye when Tom and his best friend, Noah, test their new virtual reality drone before class. At the academy, once class starts and the drone is parked, their brainiac friends launch into farfetched discussions about the curriculum. When they watch a documentary about the FBI’s most wanted hackers from the eighties, they quickly start speculating that the academy custodian is one of them.

At first, Tom dismisses the idea as another one of his friends’ conspiracy theories. But using their new drone, he spies the custodian acting suspiciously around the school. As Tom and his friends search for evidence that the custodian is the missing hacker, the signs become impossible to ignore when Tom gets threatening messages that warn him away from investigating. When someone releases a virus in the school servers, all bets are off as the adjoining servers at the tech giant Swift Enterprises come under fire. Can Tom and his friends uncover the true culprit before it’s too late?

Although Tom and his friends are not well-developed characters, they are likable kids who aren’t afraid to geek out over technology. As they sneak around trying to discover if the school janitor is a famous hacker in hiding, they cause some innocent havoc—spilled soda in the cafeteria, a drone racing through the halls, and hiding in a closet. Told from Tom’s point of view, the story has an easy-to-read, conversational tone which allows the readers to understand Tom’s motive for keeping the adults in his life in the dark.

Tom’s father only makes a brief appearance in the story; however, Tom’s father makes Tom a priority and doesn’t let work get in the way of spending time with his son. When Tom’s father discovers Tom’s secret sleuthing, he lets Tom know that he “could always come to him about anything; that it won’t matter how crazy or outlandish my theories may seem.” Even though Tom’s father is extremely wealthy, Tom doesn’t try to use his father’s wealth to get out of trouble. Instead, Tom and his friends serve their punishment without arguing or complaining.

The Drone Pursuit incorporates mystery, action, technology, and a touch of humor into an easy-to-read story that younger readers will enjoy. Even though the inventions are not amazing, younger readers will like the fast-paced, entertaining story. Readers who are not ready for the Alex Rider Series or the Theodore Boon Series will find The Drone Pursuit to be the perfect alternative.

“So I’m a lookout now, hum? Is there no end to my life of crime?” Amy. –The Drone Pursuit