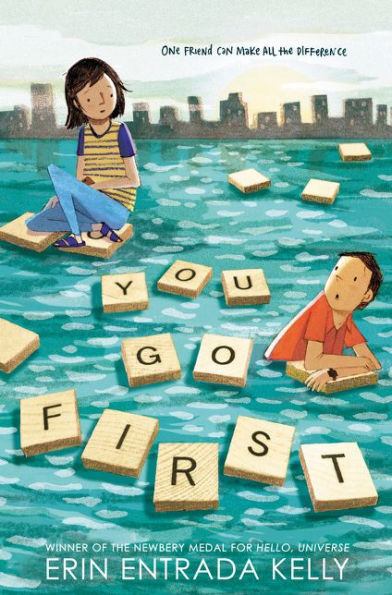 Ben doesn’t have any friends. He isn’t going to let that stop him from making an impact on his middle school. He’s determined to run for a student body office. But Ben isn’t prepared for a high school bully.  And life only gets worse when his parents announce that they are getting a divorce.

On the outside, Charlotte and Ben’s lives are completely different. Charlotte lives in Pennsylvania. Ben lives in Louisiana. But internally, both are smart, and both are struggling to fit into middle school. An online game of Scrabble brings the two together, but can a game break up their loneliness?

Beautifully written in easy to understand language, You Go First shows the power of having a friend. At first, Charlotte and Ben’s struggle seems stereotypical—smart kids enter junior high and realize they have no one to sit with at lunch. However, the characters are so unique and well-developed that the readers will feel their confusion, pain, and desire for someone to talk to.

Unlike many stories, You Go First looks at not only how mean middle school students can be, but Charlotte also begins to see how she is similar to the mean kids. Through the story, the reader will come to a better understanding of what friendship should look like. You Go First does not end with a happily-ever-after ending; however, the story does show how one friend can make a difference in a person’s life.