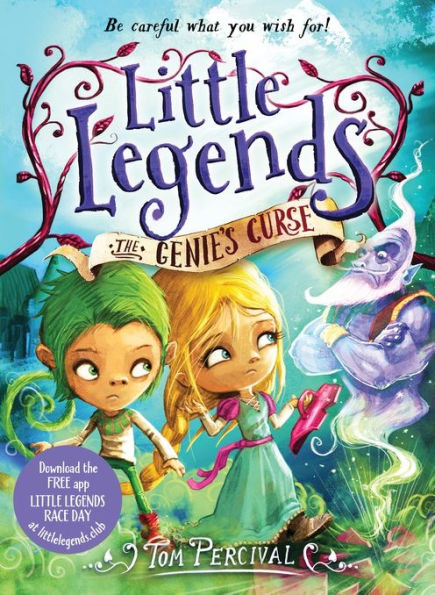 “Remind me never to hide in a laundry basket full of dirty socks again,” Rapunzel. —The Genie’s Curse

Rapunzel loves being a princess because it’s so much fun. Disaster strikes when she accidentally breaks a magical urn and blames it on Ella. The urn belonged to a genie, who is now very angry. The genie cast a spell on Rapunzel. Now everyone in Tale Town blames everything on Rapunzel. In order to avoid the angry town people, Rapunzel leaves town. Can a little green monkey called Alphege help Rapunzel? Will Rapunzel lose her new friend, Ella, if she tells the truth behind the curse?

Each book in the series focuses on a different character but continues from plot points in previous books. The Genie’s Curse has non-stop action and funny humor. The plot jumps from disaster to disaster, which makes the story interesting, but confusing. The large number of characters and difficult vocabulary make The Genie’s Curse a good choice for confident readers. There are several characters that have been cursed and only appear as humans for part of the time; this may cause confusion for some readers.

Rapunzel’s parents are absent for most of the book and are more concerned with vacationing than being good rulers. Although the story has a good theme—honesty is the best policy—the ending falls flat. When the queen discovers that Rapunzel lied, she says, “I’m very proud of you, Rapunzel. Your brave words have shown me that there is more to life than being pretty and having lovely things. And to reward you, I shall buy you two new ponies and a party dress!”

Black-and-white pictures help bring the characters and actions to life. The evil villains are not scary, but add suspense to the story. The Genie’s Curse is an entertaining story that allows readers to jump into the fairy tale world.

“Remind me never to hide in a laundry basket full of dirty socks again,” Rapunzel. —The Genie’s Curse